Zelda Wiki
Register
Don't have an account?
Sign In
Advertisement
in: Palaces, Locations, Locations in The Wand of Gamelon 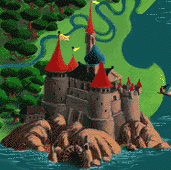 Dodomai Palace is a location in The Wand of Gamelon.[1] It is unlocked after completing Dordung Cave.

Dodomai Palace is a large palace and the residence of Duke Onkled, the ruler of Gamelon. The Palace is located in the south of Gamelon, atop a coastal hill that looks over much of the island. Following Ganon's siege, the Palace has become overrun with monsters, and is now controlled by the minion Hektan. The Palace gates can only be reached by taking a detour through a dark, flooded tunnel in the hill's base, inhabited by Arkadais, Zolas and Keese. Standing outside of the Palace is Impa, who reveals through the Triforce of Wisdom that King Harkinian had been captured by Ganon, and Lord Kiro imprisoned by Hektan.

The Palace interior is heavily guarded by Darknuts. It also appears that the Palace's structure has been compensated, as a large number of Spikes fall from above in certain places. The Palace gates are initially locked, whose Key is guarded by a pair of Darknuts outside. Inside the Palace is a hallway that leads to several doors. Two doors in the upstairs hallway are locked, preventing entry to the Palace library. The door at the bottom of a stairway leads to another hall covered in cobwalls. A Key sitting on a smashed pillar opens the door at the end of the hall, where Impa can be found again. She warns Zelda about Hektan.

The very first door in the main hallway leads to a stone stairwell, where Falling Spikes try to impede Zelda's progress. At the top is a door that leads to the outside Palace walls, where Zelda faces Hektan. Upon his defeat, Zelda earns a Life Heart, and continues to the window of a small tower. Inside she finds Lord Kiro bound by chains and frees him. He reveals to her that Duke Onkled is corrupt and had betrayed the King. He also tells her to strike the head of a portrait within the Palace library to enter Onkled's chamber. He then escapes and leaves behind the Key to the library.

The Palace library is a small chamber with two large bookshelves on either side. Atop its stairs is the aforementioned portrait, which striking reveals another Key that opens the next door to Onkled's chamber. Inside Onkled pleads to Zelda not to hurt him, and reveals the entrance and Key to Reesong Palace, where Ganon is hiding. He is then apprehended by Lord Kiro. A Triforce Map then appears at the end of the room. After completing the stage, Nokani Forest is unlocked.