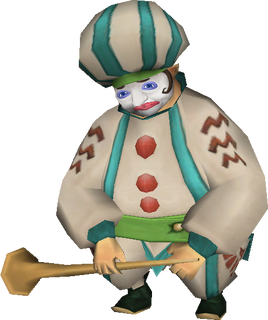 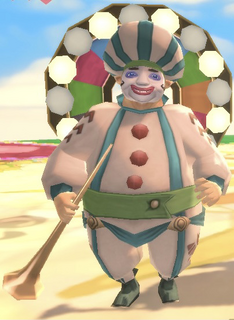 Dodoh is a character in Skyward Sword.[2]

Dodoh resides on a floating island called Fun Fun Island, an island that he created as place where people could have fun. When he is first spoken to, he says that he is still making his final preparations.[3] However, after obtaining Scrapper the Ancient Robot, he will be found in a depressed mood. Dodoh explains to Link he had lost the Party Wheel he wears on his back, which flew off and went beneath the clouds.[4] Link agrees to look for it and finds the Party Wheel in the Lanayru Desert region. After bringing it back to Dodoh through Scrapper, he will become so happy that five Gratitude Crystals will be given to Link. Dodoh also lets Link be the first person to play Dodoh's High Dive for free.[5]

If Link manages to pass through all five multipliers and land on the 50-Rupee space during Dodoh's High Dive, Dodoh will give him a Piece of Heart.

Dodoh's name is likely based on the dodo bird.