This article is about the Divine Beast. For the Main Quest of the same name, see Divine Beast Vah Naboris (Quest). 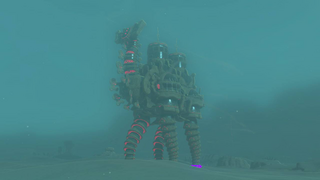 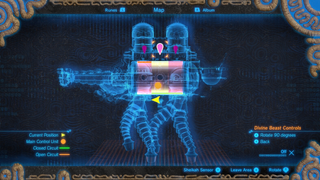 The Divine Beast Vah Naboris (pronounced /nəˈbɔər.ɨs/ nə-BOAR-iss)[1] is a Divine Beast and a dungeon in Breath of the Wild.[2] It is a giant machine that loosely resembles a Bactrian camel. The two humps on its back generate electricity to strike lightning onto those who come near.[3]

Naboris was created over 10,000 years ago by the Sheikah, along with the other three Divine Beasts and Guardians, to combat Calamity Ganon.[4][5] Four Champions were picked to pilot the Divine Beasts, who launched a full-scale attack on Ganon,[6] headed by a princess and a hero wielding the Master Sword. With their overwhelming technological might, their efforts were successful and Ganon was sealed away for thousands of years.[7]

110 years before the events of Breath of the Wild, the Royal Family of Hyrule was warned by a fortune teller of Ganon's return.[8] In preparation of stopping Ganon's return, the Divine Beasts were rediscovered after being excavated and four new Champions were chosen to pilot them.[9] The Gerudo chief Urbosa was chosen to operate Naboris.[10] It was also during this time that Naboris served as the protector of the Gerudo people of Gerudo Desert.[11][12] However, despite Link's, Princess Zelda's and the four Champions' best efforts and preparations, Ganon surprised them by corrupting and taking control of the Divine Beasts.[13] Urbosa was killed by Thunderblight Ganon, a being created by Ganon to seize control of Naboris.[14] The losing battle resulted in Link becoming seriously wounded and being taken to the Shrine of Resurrection to recover while Zelda fended off Ganon alone while Link was dormant in the Slumber of Restoration.[15]

A century later, Ganon's power grew strong enough to remotely control the Divine Beasts once more even in his imprisonment.[16] Under Ganon's control, Naboris wanders the East Barrens of the Gerudo Desert, threatening the inhabitants of Gerudo Desert with the risk of being struck from its lightning should it travel too close.[12] Until Link arrives to calm Naboris, it caused problems for people in the Gerudo Desert, obstructing travel and deterring visitors.[17][18]

Entrance to the Divine Beast

In order to stop Naboris, Link must enter Gerudo Town and seek counsel with Riju, the Gerudo chief, and offer to quell it. Interested by Link's offer, Riju informs Link that her precious heirloom, the Thunder Helm, was stolen and tasks him with retrieving it from the Yiga Clan Hideout.[19] After successfully returning the Thunder Helm, Riju dons it and instructs Link to meet with her at the Lookout Post south of Gerudo Town.[20] Before leaving, she mentions that the only way to get close to Naboris is by riding a Sand Seal.[21] Upon meeting with Riju at the Lookout Post, she will tell Link of her plan to take down Naboris. The first stage of her plan is to draw close to Naboris with Sand Seals,[22] which are capable of quickly crossing vast distances of desert sand. The second portion of her plan is to use Bomb Arrows to damage Naboris' feet, inhibiting its ability to draw power from the ground.[23] To this end, Riju gifts Link with a bundle of twenty Bomb Arrows.[24] If Link consents to the plan, Riju will guide Link out into the desert and perform a brief ritual, calling for help in their mission from the ancestors of the Gerudo.[25] Responding to her ritual, the Thunder Helm creates an electrified barrier which encompasses both Link and Riju. Offering one more plea to Urbosa, Riju begins her charge towards Naboris.[26]

In order to successfully subdue Naboris, Link must strike each of its four hooves with Bomb Arrows twice. When near Naboris, it will draw in energy to fire a powerful bolt of lightning at Link, potentially damaging him if he is not within the protective radius of Riju's Thunder Helm. Upon striking Naboris' hooves with Bomb Arrows enough times, it will temporarily shut down, causing its legs to buckle and its body to fall to the ground. As she is unable to face the obstacles within, Riju bids Link well in completing the task to calm Naboris alone.[27] Once Link is inside Naboris, it will resume moving and he will activate the Divine Beast's Travel Gate. After doing so, Urbosa will call to him, announcing her anticipation for the moment that they can wrest control of Naboris back from Ganon.[28]

It is impossible to enter Naboris without Riju's assistance, as its hooves are submerged under the desert sands before Riju joins Link. Additionally, its feet will not react to being struck by Bomb Arrows. Its electric attacks will deal a base 32 points of damage to Link, even if he has the Unshockable Set Bonus from the Rubber Armor set active.

Naboris is heavily-themed around electricity and utilizing electric currents in conjunction with circuits to activate puzzles and manipulate components within its body. Upon entry to Naboris, Urbosa instructs Link to find the Guidance Stone that will download a map of Naboris onto his Sheikah Slate.[29][30] Should Link need to leave Naboris, he may do so by directly warping out with the Sheikah Slate's map, or by standing atop the Travel Gate to be taken directly to the entrance of the aforementioned Lookout Post. The entrance to Naboris is a sort of undercarriage accompanying its torso, with a small flight of stairs leading upwards into the interior its torso. The archway connecting the flight of stairs is obstructed by a formation of Malice attached to a Eye of Malice, which must be destroyed in order to advance.

The interior of the torso is divided into three primary cylinders which feature a complex system of multi-leveled platforms with the main control unit situated on the middle cylinder. The sides of the torso feature a set of three apertures on each side with the two closest to Naboris' head obstructed by cracked tile walls that must be destroyed with explosives in order to pass through. The Guidance Stone that will distill the map of Naboris is set in an antechamber at the far rear of the torso. Upon activating it, a 3D map of Naboris will appear in place of the Sheikah Slate's map of Hyrule while Link is inside Naboris. The five terminals needed to activate the main control unit will appear as glowing points throughout Naboris' map and Link will gain the ability to rotate the three cylindrical sections of Naboris' torso by increments of 90 degrees to reposition the platforms inside.[31][32] The map also shows Link's position within Naboris and allows him to exit it remotely by pressing the X button while viewing the map. The map shows the primary, trisected circuit along the internal cylinders, coloring them either green or orange to indicate whether the circuits are closed or open, respectively. Two are closed by default, while the one along the ceiling closest to Naboris' neck is open. The power source for the circuits is located on the underside of the platform supporting the main control unit, perpetually powering the central circuit.

Two of the five terminals within Naboris are located within the cylindrical torso chamber. One terminal, located along the cylinder closest to Naboris' neck, is accessible when the circuit is positioned at the top. The other terminal is set in a small chamber along the back cylinder, which can only be entered by rotating the cylinder 180 degrees and entering from the connecting chamber in Naboris' right hip. The terminal can only be activated by rotating the cylinder an additional 90 degrees upon entering the chamber, setting its pedestal upright. A third terminal is located on the middle floor of Naboris' first hump, protected by Malice connected to a Eye of Malice. A fourth terminal is situated in the lowest chamber connecting Naboris' humps together, protected by a portcullis that can only be released by placing two electric orbs along the small pedestals with circuits connecting to nodes above the portcullis. The final terminal is located inside Naboris' head, which can be accessed only by forcing Naboris to retract its neck in a vertical position by electrifying the two nodes at the base of its neck. This creates an elevator that will carry Link towards Naboris' head.

Once Thunderblight Ganon has been defeated, Link will be able to activate the main control unit controlling Naboris, at the expense of being unable to enter it again.[35] In doing so, Link frees Urbosa's spirit, which was trapped within Naboris over the course of the century under Ganon's control.[36] Urbosa thanks Link for liberating her, and offers him her unique ability to command a flurry of lightning, called Urbosa's Fury.[37] Afterwards, she asks Link to reassure Princess Zelda that the events which unfolded a century ago were out of her control and that she is not to blame for what resulted from Ganon's attack.[38] Bidding farewell to Link,[39] Urbosa guides Naboris to Spectacle Rock's southern mesa where she anticipates the moment that they can achieve their revenge on Ganon.[40]

Divine Beast Vah Naboris is named after Nabooru,[40] the Sage of Spirit from Ocarina of Time.