Zelda Wiki
Register
Don't have an account?
Sign In
Advertisement
in: Objects, Divine Beasts, Objects in Breath of the Wild, Objects in Hyrule Warriors: Age of Calamity 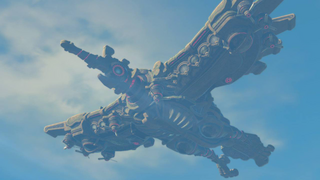 Weakening Calamity Ganon
The Divine Beasts[1] are four titanic mechanical animals built by the ancient Sheikah in order to aid the princess and the hero in sealing away Calamity Ganon some 10,000 years before the events of Breath of the Wild.

10,000 years ago, the Sheikah built Ruta the elephant, Rudania the salamander, Medoh the eagle, and Naboris the camel to combat the anticipated revival of Calamity Ganon. Piloted by four Champions from across the land, they paved the way for victory against Ganon.[1] Shortly after this, the king of Hyrule at that time, gripped with fear due to the awesome firepower that these technologies possessed, had all further research and development abolished. The Divine Beasts were buried beneath the ground, and their existence passed on into legend.

Over 100 years ago, due to rising fears of the return of Calamity Ganon, the Royal Family of Hyrule ordered that the Divine Beasts be unearthed and readied for another battle owing to a fortune teller's prophecy. After several years, all four of these machines were found after intensive excavations. This time, Ruta was piloted by the Zora princess Mipha, Rudania was piloted by the Goron Daruk, Medoh was piloted by the Rito warrior Revali, and Naboris was piloted by the Gerudo chief Urbosa.

Their mission failed when Ganon, now aware of the threat that the Divine Beasts posed to him, sent the four Blight Ganons to wrest control of each Beast. The Blights succeeded; the pilots of each Divine Beast were killed, and Ganon took control of the four Beasts. But following Zelda's containment of Ganon at Hyrule Castle, for nearly 100 years thence, the Divine Beasts and all of the Guardians under his control fell dormant. This gave the survivors of the Great Calamity time to try and recover, and for life to begin to flourish once more in the land of Hyrule.

However, shortly before Link's awakening, and due to Zelda's power fading, Ganon began to stir. And with him arose the Divine Beasts and the Guardians, still under his command. Ganon used them to bring further strife to Hyrule: Ruta caused an unending rain on Zora's Domain that threatened to flood all of Hyrule, Rudania caused Death Mountain to erupt endlessly, Medoh prevented the Rito from soaring at their preferred altitude, and Naboris caused an unending sandstorm–complete with risk of deadly lightning–in the Gerudo Desert.

When Link awoke from the Shrine of Resurrection, he set out to free the Divine Beasts from Ganon's control. He entered each Divine Beast and defeated the Blight Ganons controlling them, freeing the spirits of their pilots in the process. At Link's confrontation with Calamity Ganon, the Divine Beasts unleashed their power to weaken Ganon, just as they did 10,000 years prior.

The Divine Beast Vah Ruta resembles an elephant, and its element is water. The trunk is opposable and can spew an infinite amount of water. It can even spray water into its interior, which causes a large waterwheel to turn, allowing access to the upper sections of the Divine Beast. Ruta is also capable of using the Rune Cryonis to protect itself. The Divine Beast's Main Control Unit is located at its rear. Ruta is named after Ruto, the Sage of Water.[2]

The Divine Beast Vah Rudania resembles a salamander. Its element is fire. It has four compartments near each of its legs that store Guardian Sentries. Rudania can climb vertically like an actual salamander, and doing this rotates the interior of the Divine Beast by 90 degrees. The Main Control Unit is located on the top deck, in the center of the Beast's back. Its name is an anagram of Darunia, the Sage of Fire.

The Divine Beast Vah Medoh resembles an eagle. It represents the element of wind. To protect itself, it uses a force shield maintained by four generators - one on each wing, one near its head, and one near its tail. The middle section, the wings, can tilt side to side. This is normally used to help Medoh turn in the air, but it also reorients the interior of the Divine Beast. The Main Control Unit is located on the top deck, between the Beast's wings. While the other Divine Beasts are named after Sages, the namesake of Medoh is less clear. With its pilot being a Rito, it may be named after Medli, the Rito Sage of Earth.

The Divine Beast Vah Naboris resembles a camel. Its element is thunder. The "humps" are actually powerful lightning generators, which it uses to protect itself. The interior of the Divine Beast is split into three cylinders, each of which can rotate a full 360 degrees. The center cylinder contains the Main Control unit on one side of a platform, and a Sheikah power source on the other side. Urbosa states that Naboris is named after Nabooru, the Sage of Spirit.[3]

As part of the "EX The Champions' Ballad" Main Quest, it is revealed that the Hylian Champion can acquire a Divine Beast of his own through completing the trials given by Monk Maz Koshia. After defeating the monk as part of his final trial, he will award Link with the Master Cycle Zero, a Divine Beast created for the "true hero". Like the other Divine Beasts, it is modelled after an animal, specifically a Horse, though unlike the other Divine Beasts it is much smaller in comparison and takes the form of a motorcycle with a horse motif. Due to its Horse-like design, certain characters like Konba identify it as such. Link can activate it via the Master Cycle Zero Rune which allows him to summon the Master Cycle Zero, though he is unable to do this in certain areas such as Gerudo Desert. Like a Horse, Link can mount and ride it, engage in mounted combat while riding it, and use it to run over enemies. However, unlike Horses, it requires Fuel which can be produced by filling its tank with materials.

The Divine Beasts all appear in Hyrule Warriors: Age of Calamity. In the timeline before the Great Calamity, the Divine Beast will be assigned their original Champions and be piloted in certain scenarios, armed with cannons and projectiles for heavy splash and strong damage. Unlike what happened to them as well as their respective pilots in Breath of the Wild, none of the Divine Beasts fall under Calamity Ganon's control due to Terrako summoning time portals to summon future warriors to protect the Champions and give Link and the non-pilots more time to reach the Divine Beasts and destroy the Phantom Ganons. As a result of their efforts, all four Champions survive their encounters with the Phantoms that would have killed them and the Divine Beasts remain under Hyrulean control, essentially putting Calamity Ganon at a disadvantage.