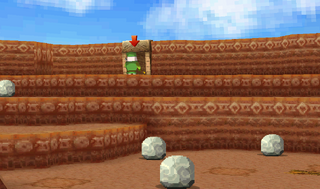 Disorientation Station is a location in Spirit Tracks.[1]

Situated in the northwest of the Fire Realm, the station can only be accessed after taking the Goron Child in Goron Village to Hyrule Castle Town, who will express his gratitude by giving Link a Force Gem, thus revealing the Spirit Tracks to Disorientation Station.

Link must climb to the upper levels of the station by using the Song of Birds and the Whip to hold onto the trapeze that are being carried by the birds flying nearby. Eventually, he will spot a Guard standing near a cave, who reveals to Link that he and a friend had heard of about a golden treasure. However, while they were searching for it, they stumbled into a monstrous plant, which caused him to get frightened and run away, leaving his other soldier friend behind.[2] The soldier then asks the young hero to go in the cave for him and look for his friend, giving Link a hint on how to get to the treasure since the cave is a sort of labyrinth: if Link goes through the southern opening, he will find himself back at the beginning, which leads to the cave's exit. By going north, he will eventually arrive to the treasure that is waiting to be discovered.[3] Before Link goes in, the guard tells him he can keep the treasure as long as he finds his friend.[4]

The inside of a cave consists of various rooms that are connected in a maze-like fashion. The north, west, and east entrances of the maze lead Link to other rooms that, if navigated in the correct order, will lead Link to the treasure the guard spoke of. From the cave's entrance, all the young hero must do is go north, then east to find himself in a room with two Fire Babas that are positioned right across each other. At the northeast corner is a rocky tile, where, if the Song of Discovery is played, it will reveal a treasure chest containing an Alchemy Stone, the so-called "golden treasure."

Fate of the Guard's Friend

South of the room containing the treasure is an engraving written on stone. If Link reads it, he will discover that it was written by the soldier's friend, who reveals in his last note that he originally planned to keep the treasure for himself. It goes on to say that he could not find the way out of the cave and wanted to apologize to his friend before dying, urging him to not worry about him anymore and to move on with his life.[5]

When Link exits the cave and tells the soldier the news of his friend, he promises to keep on living for his friend's sake and gives the young hero a small reward as a sign of gratitude.[6]

Stations in The Legend of Zelda series
Community content is available under GNU Free Documentation License unless otherwise noted.
Advertisement