"Use your shield well and fight with (Z) Targeting techniques!"
— Navi

Dinolfos (ダイナフォス, Dainafosu?, Dinafos), also referred to as Dinofols or Dynalfos, are recurring enemies in the Legend of Zelda series. They are anthropomorphic reptiles clad in partial body armor and an often roughly triangular loincloth , and wield bladed weapons. In some games, they have the ability to breath fire. They are similar to the Lizalfos race, but are more dangerous.

Dinolfos can be defeated by using the shield to defend oneself against their attacks, and retaliating immediately after their strikes. Openings in their defense can also be found and used against them, all the while using the shield to guard. Deku Nuts are particularly effective in stunning them and leaving them entirely vulnerable to attack.

Dinolfos appear in the Gerudo's Training Ground and Inside Ganon's Castle. In the The Legend of Zelda: Ocarina of Time Master Quest, they also appear in the Spirit Temple. They cannot breathe fire, and largely act as a more powerful version of Lizalfos.

Dinofols breathe fire in this installment and wield longer, axe-like weapons. Dinofols always breath fire after being hit, and will also often do so after dodging back from an attack. This is particularly dangerous for Deku Link and Zora Link as they are vulnerable to fire. A Dinofols guards the Hero's Bow in Woodfall Temple, serving as the game's first proper mini-boss. A pair encountered in Snowhead Temple hold Stray Fairies, and a trio of Dinofols are fought in the Secret Shrine. Also, one more blocks a doorway in the Hylian Moon Dungeon. Dinofols will not take the extra damage usually dealt by Fire Arrows, only receiving the damage of a normal arrow. Dinofols are not affected by the Stone Mask. They wore enormous breastplates and leg plating. For clothing, just a white simple loincloth.

Dynalfos are found in various locations, most notably in the Cave of Ordeals. Link's first encounter with them occurs in the Temple of Time. These reptilian enemies are more dangerous than Lizalfos, being larger, more powerful, and heavily armored. They are some of the most difficult regular enemies in the game, as they tend to block attacks with their large shields until Link leaves himself open, at which point they counterattack with their massive axes or blade-tipped tails.

The simplest way of defeating Dynalfos is to wait for them to raise their weapons and hit them when they lower their shields, but the timing is difficult, especially if they use their tail swipe. Fortunately, Link can use a variety of techniques to dispatch Dynalfos; one is to continually use the Shield Attack on them, followed by the Helm Splitter. Quickly following a Helm Splitter with a Great Spin Attack will dispatch a Dynalfos. It is also effective to strike them with a Bomb Arrow, but this only works if they have not noticed Link. This can be useful even if Link misses, as all the Dynalfos within a certain range will rush to investigate any explosions, leaving them easy targets.

The Ending Blow is difficult to perform against Dynalfos, but not impossible. Since they are well-armored, the most effective attack is the Mortal Draw, because it can instantly kill them. However, the Mortal Draw does not always work since Dynalfos can sometimes block it with their shields. The Back Slice can also be effective against them, but multiple attempts may be necessary before Link can catch them off guard. Also if timed perfectly, the Jump Strike and the Great Spin Attack will kill them in one hit as well.

Dynalfos are easily defeated by the Ball and Chain, if Link spins it around his head and moves towards them. The enemies will either charge at Link only to run into the whirling Ball, or raise their shields and defend, allowing Link to force them into a wall or trigger an attack.

Dynalfos can jump a short distance to cross pits, though they are vulnerable to attack immediately after their jump. This is rarely a factor, but it can give Link an advantage in areas such as the City in the Sky. 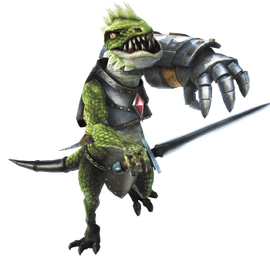 Dinolfos appear as enemy officers, and are similar to Lizalfos, but show their weak point gauge less often and performs slightly different attacks than Lizalfos does in-game. While Lizalfos are based on their Ocarina of Time incarnations, Dinolfos appear to be a combination between the Skyward Sword incarnation of Lizalfos and the Ocarina of Time and Majora's Mask incarnation of Dinolfos, with shape coming from Skyward Sword, with the equipment and coloring of Ocarina of Time and Majora's Mask incarnations. In the game, they refer to themself as members of the Dragon race, indicating that they are species of flightless dragon, which may explain their ability to breath fire. There is also a Dark shadowy variant called Dark Dinolfos.

The name of the Dinolfos is most likely a derivative of the Greek "deino" which means "terrible", a term famously used in the word "dinosaur". The "-fos" suffix is shared with the names of other enemies in The Legend of Zelda series such as Stalfos, Lizalfos, and Aeralfos. 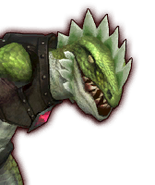 Retrieved from "https://zelda.fandom.com/wiki/Dinolfos?oldid=543177"
Community content is available under CC-BY-SA unless otherwise noted.