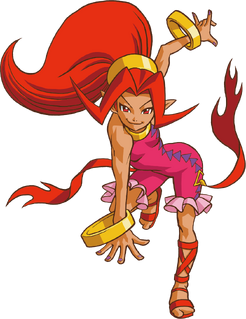 Oracle of Seasons
Oracle of Ages
The Minish Cap

Din is a recurring character in The Legend of Zelda series.[3]

Din appears in Oracle of Seasons, where she is a talented and famous dancer in the land of Holodrum.[4] As the Oracle of Seasons, Din is responsible for regulating the seasons of Holodrum. Although she has the power to change the seasons at any time or place, she refrains from doing so, allowing them to flow naturally. She travels with a Troupe of Performers throughout the land as a means of evading General Onox, who intends to imprison her in order to throw the natural order into chaos.[5] Din is also aware of the location of a mystical tool known as the Rod of Seasons, which allows Link to change the seasons at will.

Din's personality is an energetic one, and she loves to have people dance with her. At the start of Oracle of Seasons, Din has Link dance with her.[6][7] She is also known to be a caring individual who helps others.[8] After Onox's downfall, Din will quite often suggest that she and Link dance together again. She also does so in Oracle of Ages, and in a Linked Game after Ganon has been defeated.

Din is said to be a famous dancer from Holodrum in The Minish Cap.[9] After Vaati impersonates King Daltus, she appears alongside the other Oracles in a room on the second floor of the Happy Hearth Inn, where she will tell Link that they are looking for somewhere to live.[10]

If Link Fuses Kinstone Pieces with Farore, Gorman arrives in Hyrule Town seeking to rent out his Vacant House.[11] When Link speaks with Gorman, he will ask Link to let him know if he finds a woman willing to rent the House.[12] Link has the option to show any of the three Oracles the Vacant House; if he chooses Nayru or Farore, Din remarks that things are different with only two of them remaining.[13] If the second Vacant House is built and given to another Oracle, Din is left as the only one of the trio without a home, and will remark that she is lonely.[14]

If Link shows either of the Vacant Houses to Din, she will move in; he can visit her afterwards, whereupon she will thank him and offer to give him Din's Charm whenever he has an Empty Bottle.[15] When consumed, the Charm makes Link's attacks stronger and turns his tunic (and Ezlo) red for the duration of the effect.[16]

Link can also Fuse Kinstone Pieces with Din,[17] resulting in a Joy Butterfly appearing in the Wind Ruins; when it is collected, Link is able to shoot Arrows more quickly.[18]

In Super Smash Bros. Ultimate, Din appears as a Spirit with the ability Lava-Floor Resist which reduces the damage taken from lava floors.