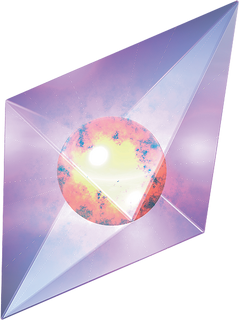 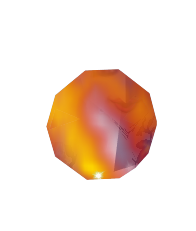 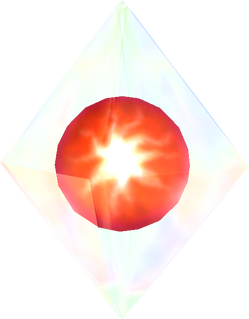 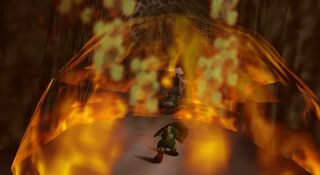 Din's Fire is a recurring ability in The Legend of Zelda series.[1]

Din's Fire is obtained from the Great Fairy of Magic near Hyrule Castle in Ocarina of Time.[2] When used, Link summons a dome of Fire around his body that expands outward, affecting anything in its range.[3] When used near Torches, it lights them. Din's Fire drains 6 Magic Points with each use.

Din's Fire is the only Spell necessary to complete the game. It is required to simultaneously light the Torches at the entrance to the Shadow Temple, opening the way into the Temple. Inside the Temple, Din's Fire must be used to incinerate a spiked, wooden wall trap that threatens to crush Link. The Boss Key of the Shadow Temple becomes available upon destroying it.

In the Super Smash Bros. Melee, Din's Fire is Zelda's side special move. When performed, Zelda shoots a fireball from her hands, which can travel long distances in a straight or curved line. It can be controlled with the control stick or D-pad while holding the special attack button. When releasing the special attack button, the fireball explodes. The more distance Din's Fire travels, the stronger the explosion.[4]

In Hyrule Warriors, Din's Fire appears as an Attack Badge in the Bazaar's Badge Market. When purchased for a Warrior, it increases the rate that the Special Attack Gauge fills for that particular Warrior.[5] It appears in three iterative Badge qualities: bronze, silver and gold; each providing a stronger effect than the one prior.

One of the attacks that Zelda can execute with her Rapier is summoning a giant, blazing hemisphere. This, joined with her two other attacks resembling Farore's Wind and Nayru's Love, appears to be a reference to Din's Fire.

Din's Fire appears as a special offensive ability unique to Zelda. It can be randomly obtained from Cadence in one of the caves she appears in, with her claiming that she had found a monster holding onto it. Once acquired, Zelda can then use it to deal explosive damage to enemies and objects, including cracked walls to reveal caves at the cost of Stamina.[6] The spell also deals fire damage, allowing her to burn stumps and braziers without the use of a Torch or Fire Arrows.

Magic in The Legend of Zelda series
Community content is available under GNU Free Documentation License unless otherwise noted.
Advertisement