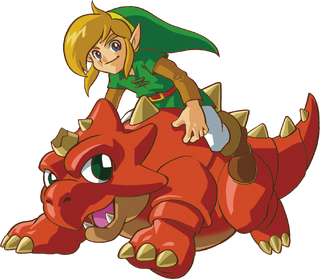 Era of Light and Dark
Dimitri is a recurring character in The Legend of Zelda series.[3] He is one of the three animal companions Link can partner with in Oracle of Ages and Oracle of Seasons, the other two being Ricky and Moosh.

Dimitri is a talking red Dodongo who can swim up waterfalls and against currents.[4] He attacks enemies by biting them. He is summoned by playing Dimitri's Flute, though this will not work everywhere.[5] Link can pick him up and throw him with the Power Bracelet.

The landscapes of certain regions in Holodrum and Labrynna change depending on which animal companion Link befriends. With Dimitri, these regions become flooded with water to match his swimming abilities.

In Oracle of Seasons, Link will eventually have to venture into Spool Swamp for the next Essence of Nature after completing the Snake's Remains dungeon. During this time, Link can find and acquire a Strange Flute. One of the Strange Flutes can be acquired by winning a dance round in the Subrosian Dance Hall, yet only before Link helps Ricky the kangaroo. While heading into Spool Swamp, Link will encounter one of the potential animal helpers, Ricky. Blaino, who lives nearby, has taken away Ricky's boxing gloves, and Link must fight him in a boxing round and defeat him to win back the gloves. When the gloves are returned, Ricky will offer to help Link by transporting him to Spool Swamp.

If Link has won the Strange Flute from the Subrosian Dance Hall earlier, he will eventually encounter Dimitri being attacked by the Great Moblin's henchmen.[6] Link pays the henchmen 50 Rupees and another 30 Rupees to leave Dimitri alone.[7][8] Dimitri then thanks Link and joins him, turning the Strange Flute into Dimitri's Flute.[9]

If Link has Ricky's Flute or Moosh's Flute, he will encounter Dimitri in Sunken City. Link finds a group of children harassing Dimitri, claiming to be the Safety Patrol. By giving one of the children all of the Bombs that Link has, the children will flee. As thanks, Dimitri will temporarily join Link and allow him to ride him, which is necessary to maneuver the flooded city until Link gets the Zora's Flippers.[10] The city has a couple of waterfalls which only Dimitri can climb. One of the waterfalls leads to the Master Diver who will test Link in getting the Master's Plaque, with the reward being the Zora's Flippers. Shortly after Dimitri will leave.[11] Link can find the Safety Patrol later talking about Dimitri, considering him as a patrol member.[12]

If Link does have Dimitri's Flute however, all Link needs to do is call Dimitri into the city rather than saving him from the city's children.

In Oracle of Ages, Link first encounters Dimitri washed ashore on Crescent Island after completing the Moonlit Grotto. Two Tokay are hustling around Dimitri, planning on eating him.[13] The Tokay propose giving Dimitri to Link for Ember Seeds. They run off after tasting its intense flavor. After Link saves him, Dimitri offers to take him where he wants to go.[14] After taking Link back to Labrynna's mainland, Dimitri leaves.

When Link tries to later venture into Symmetry City, he will encounter the Fairies from the Fairies' Woods, who ask Link to help an animal who got lost in their woods. The animal will either be Moosh, Ricky or Dimitri depending on whether Link has any of the Strange Flutes or not. Dimitri will be one of the animals if Link bought the Strange Flute from the shop in Lynna City.[15] If Dimitri is found, he will decide to join Link and gives him his flute. Dimitri's swimming ability is used in the Nuun Highlands, which helps Link locate the three lazy Carpenters needed to extend the bridge to the ruined city.[16] Dimitri, however, will not accompany Link to the city as he cannot withstand the high temperatures.[17]

In Super Smash Bros. Ultimate, Dimitri appears as a Spirit with the ability, Swimmer, which allows a Fighter to swim infinitely in water with no risk of drowning.