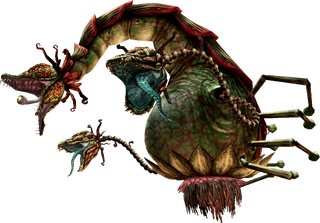 Diababa is the Boss of the Forest Temple, and is overall the first boss in Twilight Princess.[2] It is a three-headed Deku Baba, with one massive head with a hidden eye inside its mouth. The other heads have long blue tongues coming out of its jaw.

After Link enters Diababa's chamber, a large room with four waterfalls and a pool of poisonous water containing a large tree and two logs, the water will start to bubble and Diababa will emerge from the water.

The beginning of the battle starts with only the two smaller heads. Bomblings can be seen perched on logs floating in the water. Link can use the Gale Boomerang to make them collide with each of the two heads, with a single hit defeating each one. The heads will attack with a bite that can be easily avoided.

The second phase of the fight begins when the larger head bursts out of the water. After a few seconds, Ook appears and swings across the room carrying Bomblings for Link to use to stun Diababa's middle head, leaving its eye open for Link to attack with his Sword. Upon recovering, Diababa sprays poison at Link, which he must dodge. Link must repeat this process until Diababa is defeated. The two smaller heads will still occasionally attack. Link can choose to defeat them, but they will eventually regenerate. Upon Diababa's defeat, Link receives the first of the three Fused Shadows and a Heart Container.

Diababa is a portmanteau of "Diabolic" and "Deku Baba."