Zelda Wiki
Register
Don't have an account?
Sign In
Advertisement
in: Enemies, Arthropod Enemies, Common Enemies and Traps,
and 7 more 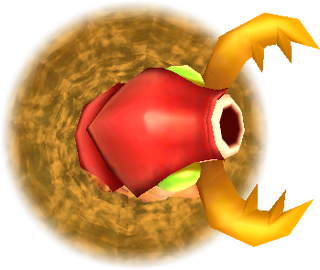 Ice Rod (ALttP | ALBW)
Sword
Devalants are recurring Enemies in The Legend of Zelda series.[1] They both appear and behave similar to that of a larval Antlion.[2]

Devalants are giant, burrowing insects with large snapping pincers that live in desert regions. They create sinkholes in the sand as they burrow underneath, drawing in their prey.

In A Link to the Past, two varieties of Devalants can be found, a red one and a blue one. The blue variety will sit and wait for Link to fall into its sinkhole, while the red variety will spit fireballs over a long distance. Upon killing a Devalant, the sinkhole which it lived in will disappear, leaving unmoving sand where it once was.

Devalants hide within sand where they wait and form pits to draw in prey in A Link Between Worlds. Devalants can be drawn out of their pits with the Sand Rod, allowing Link to quickly kill them.