Zelda Wiki
Register
Don't have an account?
Sign In
Advertisement
in: Deserts, Locations, Locations in A Link to the Past,
and 3 more 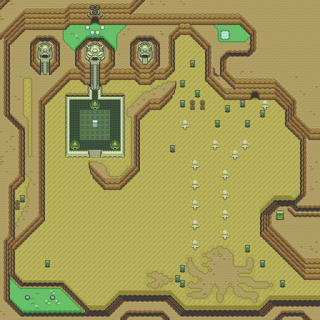 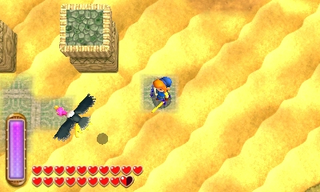 A Link to the Past
Aginah
Average Middle-Aged Man

A Link to the Past
Piece of Heart
Bombos Medallion

The Desert of Mystery is a recurring location in The Legend of Zelda series.[name reference needed]

The Desert of Mystery is a wide open area filled with cacti. It is the location of the second Dungeon in the game, the Desert Palace, which contains the Pendant of Wisdom. The only other features are a few cliffs and caves, one which is the home of Aginah.

On a cliff only reachable with the Whistle, there is a Portal to the Dark World hidden under a Rock. This is the only way to enter the Dark World equivalent of the Desert of Mystery, the Swamp of Evil. On another cliff is a tablet where Link can get the Bombos Medallion.

In A Link Between Worlds, the Desert of Mystery is sealed off during Link's search for the Pendants of Virtue, making him completely unable to reach it. It is not until Link has access to Lorule that he can enter the Desert via a Fissure located in the Misery Mire. Traversing the Desert of Mystery requires the Sand Rod to raise platforms to walk across so that Link can access different Fissures between the Misery Mire and the Desert. The Desert Palace also appears in the area, though its boss is fought in Lorule.

In the A Link to the Past comic by Shotaro Ishinomori, before Link can head out to the Desert of Mystery, Sahasrahla's Wife warns him that traveling through it will not be easy since the fierce winds and shifting sand have bested even the most capable adventurers.[1] Sahasrahla's Grandson, who Sahasrahla left in charge of his wife gives Link a hang glider that he can use to traverse the Desert of Mystery with ease.[2]

Using the "miracle wings", Link flies over the Desert of Mystery and locates the ruins of the Desert Palace.[3] Using the Book of Mudora to translate the runes he finds,[4] the ruins begin to sink to reveal a scorpion statue that has the Pendant of Power hanging on it.[5] Before Link can approach it, he sinks into the quicksand and resurfaces on top of a Lanmola. Link tries to attack it with his Sword but to no avail.[6] He however manages to retrieve the Pendant of Power from the statue and uses it to defeat the Lanmola.[7]

The Desert of Mystery shares its Japanese name, あやしの砂漠 (Ayashi no Sabaku), with the Desert of Doubt in Four Swords Adventures.

Deserts in The Legend of Zelda series
Community content is available under GNU Free Documentation License unless otherwise noted.
Advertisement