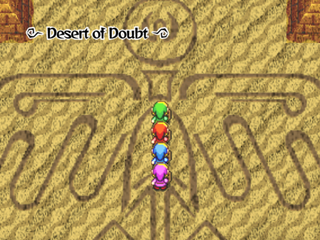 Pegasus Boots are most extensively used

The Desert of Doubt is the first stage of the eponymous level in Four Swords Adventures.[1] The Gerudo tribe can be found in a village near the beginning of this stage. The village is in a bit of an uproar after Ganondorf, guardian of the Gerudo and the desert,[2] left for the Pyramid against local laws.[3][4][5] It is revealed that Ganondorf left in pursuit of power,[6][7] and the Gerudo blocked the road to the desert to prevent others from doing so.[8] In order to pass into the desert, the Links must ask permission from the leader of the tribe, who allows them to enter because of the crisis in Hyrule.[9]

The desert areas affected by sand storms send the Links back to the Gerudo village, should they take the incorrect path. A tablet found early in the stage offers the answer to the seemingly difficult maze. The only way to progress is to "oppose the winds"[10] by taking paths the wind blows from.

The Zuna tribe can be found further into the desert. One of the Zuna members offers a Sand Rub for 100 Force Gems, which serves to heal the Links' health.[11] Another Zuna runs a Treasure Chest Game where the Links can gamble for Force Gems.

The only item found in the Desert of Doubt level is the Pegasus Boots which need to be upgraded to fully cross the desert safely.