Not to be confused with Desert Palace or Sand Temple. 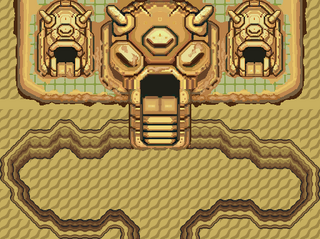 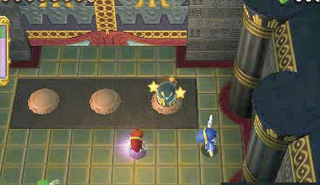 Tri Force Heroes
Stalchampion
The Desert Temple is a recurring Dungeon in The Legend of Zelda series.[1]

While it continues the second-level temple trend in Four Swords Adventures, it is the only temple in which Link must exit and re-enter mid-navigation in order to complete. In the temple's third room, an activated switch fills the temple with sand, making the Magic Hammer quite the popular item, especially since many Force Gems and even some Keys lay hidden deep beneath the beach-like flooring. In respect to gathering items, it is possible to obtain the one Blue Bracelet in this temple by manipulating one of the Beamos in the room filled with Beamos to activate a switch with its light beam (as the Links cannot reach it themselves), causing a chest containing the Blue Bracelet to fall from the ceiling nearby.

In Tri Force Heroes, the Desert Temple is the fourth and final Level of The Dunes Area.

The Desert Temple is an ancient tomb set in the desert. Unlike most Levels in The Dunes, it has almost no sand, with the exception of its final Stage, where Stalchampion is fought in a sandy arena.

In Stage 1, the Links begin at the entrance of the temple. Immediately ahead are a series of wooden posts blocking the passage, which can be pounded down with the Magic Hammer provided nearby. Another Magic Hammer and a Boomerang can be found beyond the first set of posts. A heavy Floor Switch lies at the end of the room, which when pressed by all three Links opens two large doors to the next chamber. In the next room is a Switch Mole that pops out at random between three holes. The Links must quickly hit it with their Magic Hammer before it drops down to open the next door; it can also be momentarily stunned with the Boomerang to make the task easier. The next room has three Switch Moles that pop out of eight holes. After they are all pounded, the doors to the Triforce Gateway opens.

In Stage 2, the Links drop into a pit whose floor layout resembles a skull. Groups of Stalfos immediately appear as they fall in. Two Hearts sit in the "eye sockets" of the floor, while Energy Potions are also provided along the walls so the Links can regain their energy. Once all the Stalfos are defeated, the Triforce Gateway appears.

In Stage 3, the Links appear on a walkway leading to a stiff teeterboard. This board can be made to tilt either up or downwards by hitting its left or right side with the Magic Hammer. Hitting the right side points it downwards, allowing the Links to hit a Shock Switch below using the Boomerang. This will send floating platforms down that snap into place, creating a bridge to the next area. The Links will have to hit the board so that it points up to reach this platform. The next ledge has a heavy Floor Switch, with a pair of Fire Keese flying nearby. The Floor Switch creates a moving platform across a pit to the next ledge, however the Links must avoid swinging Guruguru Bars while crossing. The next ledge has another teeterboard plus three timed Shock Switches. The Links must pound the teeterboard so they can reach and hit all the Switches before they turn off. This creates a bridge to the next ledge, where the Links find three more teeterboards. Initially they are tilted, but a Shock Switch nearby can be struck to flatten them. To reach the next area, the Links must pound the boards so they tilt upwards, creating a slope to the platform above, while avoiding several streams of fire in their path. At the very top is the Triforce Gateway.

In Stage 4, the Links appear in the entrance way of an outdoor stadium. When they walk forward into the sandy, circular arena where Stalchampion is fought, the gateway locks them inside while they do battle.

At the end of the Level, three Treasure Chests can be opened. Two contain the same Material, and one contains another, more valuable Material.