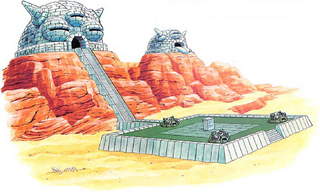 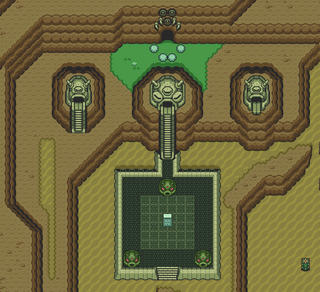 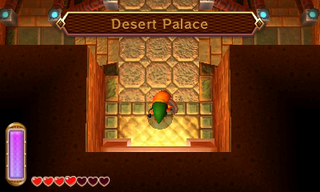 Desert Palace guide
at StrategyWiki
A Link Between Worlds

Desert Palace is a recurring Dungeon in The Legend of Zelda series.[1]

The palace is located in the south-west corner of Hyrule in the Desert of Mystery. Access is granted only by using the Book of Mudora to read the inscription on the stone that is placed on a small square with three statues surrounding it. The tablet instructs Link to wish for the way forward to open. Link raises his eyes upward and appears to cross himself before joining his hands in prayer. When he finishes, the statues revolve 180 degrees around the platform, opening a pathway to the Palace entrance.

Many of this dungeon's rooms have sand floors, with enemies that hide inside quicksand which attack Link by firing projectiles at him. It is also the first time Beamos are found. Interestingly, most of the rooms are accessible at first, and some of them lead to alternate exits. The main treasure is the Power Glove, which allows Link to lift boulders. The boss is a group of three Lanmolas. After defeating them, Link receives a Heart Container and the Pendant of Power.

Around three-fourths of the way through the dungeon, Link must actually exit through one of the outer stone heads and use the Power Glove to venture toward the second floor, where the bosses are found a few rooms further. This feature of exiting a dungeon entirely in order to progress further is shared with the Skull Woods in the same game, the Spirit Temple in Ocarina of Time, and Mermaid's Cave in Oracle of Ages.

Despite being a Dungeon from which one of the Seven Sages is rescued, the Desert Palace rests in Hyrule, as opposed to the other six Dungeons found in Lorule. It is the only one of these Dungeons that cannot be accessed before the others, due to the Sand Rod being rented out to Osfala, who must first be rescued from the Thieves' Hideout. To access the Desert Palace, Link must go to a small, cavernous area between the Southern Ruins of Hyrule and the Desert of Mystery, then travel through a Fissure to Misery Mire. From there, other Fissures lead him back to the upper areas of the Desert, which can then be crossed using the Sand Rod, leading to the Dungeon's entrance.

Many of the Desert Palace's rooms are filled with sand. The Sand Rod is required in order to create pathways for Link to cross, whether on foot or by Wall Merging. There are also numerous sand-based puzzles, like elevating a Beamos with the Sand Rod so its beams can hit Switches, filling a room with sand in order to reach otherwise inaccessible areas, and moving Gimos Statues to activate Floor Switches. In a later room, rolling Balls must be guided toward cracked and breakable blocks using the Sand Rod. The Dungeon contains the Titan's Mitt, which enables Link to lift large boulders that block certain doors and entrances.

The Sub-Bosses of the Desert Palace are a series of 32 Flying Tiles followed by a pair of Devalants, which become regular enemies later on in the Dungeon. There are two points in which Link must exit the Dungeon and enter another area to proceed; first to reach the second floor where the Sub-Bosses await, and again beyond the Big Key door, where a Fissure leads to the Boss's enclosure in Misery Mire. Once Link defeats Zaganaga, he will be rewarded with a Heart Container and the Painting of the Sage, Irene.

The Compass is in the northwestern first floor room in an easily accessible Treasure Chest. The Big Key is on a platform in the central eastern room on the second floor. It cannot be immediately accessed; Link must first raise the sand level in the room to the north, then return and use the Sand Rod to get to the Chest.

The Titan's Mitt is in the central northern room of the first floor. To access it, Link must pull a Lever on the west side of the room to raise the sand level. He must then press a Switch on the north platform of the room to open the wall around the chest. Then, using a combination of the Sand Rod and Wall Merging to get behind the torrent of sand, he can access the Mitt.