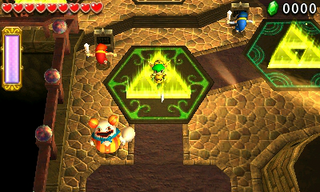 The entrance to the Forest Zone

Shadow Links
The Den of Trials is a location in Tri Force Heroes,[name reference needed] added through the Version 2.0.0 update.[1] It is designated as the 9th Area of the Drablands and contains 40 floors based on the previous Areas. At the bottom of the Den of Trials rests the Fierce Deity Armor.

To access the Den of Trials, Link must complete nine Levels and/or Drablands Challenges, then return to Hytopia, where The Great Tripini tells the young hero about the newly-discovered Area and the powerful Outfit said to be found within.[2][3] Though the Den of Trials cannot be unlocked or selected through Download Play, the Links can still access the Den if the "host" Link selects it. However, the other Links will not be able to obtain the Fierce Deity Armor in this mode.

The Den of Trials is divided into portions called Zones, with each portioned Zone being based on the Woodlands, Riverside, Volcano, Ice Cavern, Fortress, The Dunes, The Ruins and the Sky Realm respectively. Each Zone contains five Floors and is accessible from a central hub area with eight Triforce Gateways. The Floors contain Enemies that must all be defeated in order to activate the Triforce Gateway to advance to the next Floor.[4] According to The Great Tripini, all of the Fairies that accompany the Links flee in fear of the Den of Trials, leaving them with only one to start with.[5] However, by reaching the "safe room" on the fifth Floor of a Zone, the Links can obtain another Fairy trapped in a Treasure Chest after collecting the Materials from that Zone and Saving their progress. Each safe room also contains a Squiddy from which supplementary Hearts and Rupees can be retrieved before descending further. When a Zone is completed, its corresponding Triforce Gateway in the hub area becomes activated. If the entire Den of Trials is completed in a single session, beginning from the first Floor, then the final safe room will contain eight Chests with more valuable Materials than the usual three.

A party cannot enter any Zones that has not been reached by the other participant Links, forcing them to begin from the lowest common Zone available.[6] The Den of Trials features several "dark" variants of common Enemies as well as new Enemies that were not present in the other Areas of the Drablands. The final Floor features a triumvirate of Shadow Links, equipped with powered up versions of the weapons available.

Drablands in The Legend of Zelda series
Community content is available under GNU Free Documentation License unless otherwise noted.
Advertisement