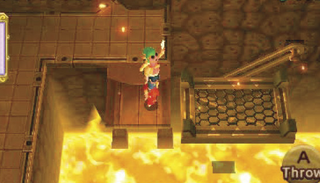 Den of Flames is a Level in Tri Force Heroes.[name reference needed] It is the third Level in the Volcano area.

In Stage 1, the Links begin inside a chasm with pools of molten lava. Two Gust Jars and a Boomerang are immediately available for use. The Link with the Boomerang is then propelled over to the next ledge with the other Links' Gust Jars, who then carries them over using the Boomerang. A chest surrounded by a ring of fire containing 20 Rupees is sitting on a ledge, this can be reached by having the Links form a Totem and then put out the flames with the Gust Jar. The Links then move to a swinging platform, which will swing them over to the next ledge. This swinging platform can also be made to swing further out by using the Gust Jar to propel it. This swinging platform leads to the Triforce Gateway, however the Links can ride another one to a chest containing three Hearts. Alternately, the Links can simply form a Totem and throw one Link onto a nearby ledge leading to it.

In Stage 2, the Links drop down to a grated platform with three Switches. Pressing the switches summons a horde of Fire Hardhat Beetles. As these enemies are covered in flames, they must first be stunned by either using the Boomerang or Gust Jars, else the Links will get burned when attacking them. However, if any Link is wearing the Goron Garb, these flaming enemies can be dispatched with only the sword. More will appear after they are defeated. After all enemies are defeated, a bridge leading to the Triforce Gateway will appear. Hearts and Rupees sitting on the ledges can be grabbed with the Boomerang.

In Stage 3, the Links appear on another platform. A pair of Guruguru Bars can be seen spinning around on the next platform across a gap. The upper bar is faster than the bottom one. The Links must carefully cross the gap while avoiding the fire bars by using the Gust Jar and Boomerang. The Links then cross a bridge north to a swinging platform. This platform swings to another one, however it does not have enough momentum to reach it, and must be propelled using the Gust Jar. The Links then ride a stone raised by a pillar of lava to another swinging platform. This final platform must also be propelled using the Gust Jar to reach a ledge above, leading to a passage with a pair of Fire Hardhat Beetles. The Links then cross a path over a lake of lava with several spinning Guruguru Bars to the Triforce Gateway.