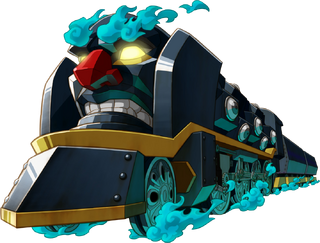 The Demon Train is a Boss in Spirit Tracks.[1] It is a massive, semi-sentient locomotive used by Chancellor Cole and Malladus.

The Demon Train comes from the Dark Realm, which Cole locates with the help of the Compass of Light made by Byrne. The train is first seen when Cole and Byrne appear in order to obtain Princess Zelda's body for Malladus. After Cole successfully resurrects the Demon King by using Princess Zelda's body as a vessel, both Cole and Malladus escape to the Dark Realm using the Demon Train. Link and Zelda chase after them after they retrieve the Compass of Light from beneath the altar in the Tower of Spirits.

Once Link and Zelda make it inside the Dark Realm, they locate the Demon Train after defeating all of the Armored Trains roaming the realm's tracks, leading them to a battle against the Demon Train in order to be able to climb on top and face off Cole and Malladus. After shooting Malladus with the bow of Light the train explodes and falls through the void, exiting the Dark Realm

At the final battle the Demon Train's remains can be seen trashed away on the background, the gears dispersed through the area and the armor faceplanted.

During the first segment of the battle, Link rides parallel to the Demon Train, at which he will need to fire with the cannon at the Bomb barrels that the train prepares to fire upon Link. The second cart will have laser-firing cannons, which must also be destroyed before they attack Link. These laser cannons take two hits to destroy. Finally, Link will have caught up to the train's face, and then can proceed to attack, which must be repeated several times. Hitting each of the blue jewels on the side of the Demon Train's engine will cause the train to stop abruptly, allowing for easier access to the train's face. Each stage has a time limit, and if the tracks run out before the stage is defeated, Link will fall off the tracks and into an abyss.

During the next part of the battle, the train is not fought, however, Link and Zelda fight Cole and Malladus atop the Demon Train now that Malladus has taken over Zelda's physical body.

In Super Smash Bros. for Nintendo 3DS, the Demon Train appears as a Trophy.