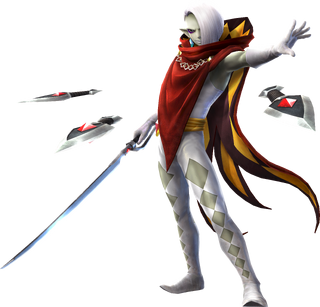 Defeating Enemies
The Demon Blade is a class of Weapon used by Ghirahim in Hyrule Warriors.[name reference needed] It is associated with Darkness.

The Lv.★ form of the Demon Blade is the 8-Bit Arrow, which is modeled after the Arrow from The Legend of Zelda. It was added to Hyrule Warriors with the Master Quest Pack DLC. In Hyrule Warriors: Definitive Edition, instead of appearing as a separate Weapon, the 8-Bit Arrow replaces the Darkfire Demon Blade when the "8-Bit Weapons" Setting is turned on in Game Settings within the Settings menu.

Ghirahim bows and chuckles before snapping his fingers. A sphere of his diamond magic forms half-embedded in the ground, before a number of swords plunge into it, followed by one larger sword, similar in appearance to Demise's Sword. The swords launch enemies away while Ghirahim laughs heartily. This attack damages a circular region in front of Ghirahim and carries no Element.[verification needed]