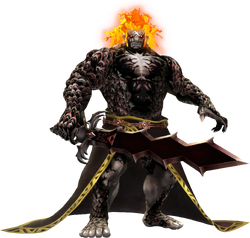 Demon King Demise, the source of all monsters

Ganon
Calamity Ganon
Demise
Shadow Link
Malladus
Ghirahim
Bellum
Vaati
Veran
Vire
Majora
Blind the Thief
Demons are a recurring race of monstrous beings that are usually of evil alignment in The Legend of Zelda series.[1] Although not all demons are evil, they still exude a dark aura that attracts monsters and radically changes the behavior of Animals.[2] Demons appear many times in different Legend of Zelda games. They desire to have control over the world and thus constitute a significant threat to Hyrule and its people.

The terms "demon" and "monster" are sometimes used interchangeably, but generally demons are born from the source of evil while monsters are creatures corrupted by dark magic. Demons command and create evil, while monsters do its bidding.[1]

During the Era of the Goddess Hylia, the Demon race emerged from the earth, desiring the Triforce, originating from their leader Demise.[3][4] Demise desired to rule the world with the enormous power that the Triforce would grant.[5] Hylia protected the Triforce and took the surviving people to the sky, hiding the Triforce there as well.[6] Hylia and the remaining tribes on the surface fought against Demise and managed to seal him away;[7] however, the goddess knew the seal would not last, so she decided to extinguish Demise with the power of the Triforce.[8] However, gods cannot use the power of the Triforce, so she abandoned her status as god to be reborn as a human.[9]

When Hylia was eventually reincarnated as a human girl named Zelda, Demise's servant Ghirahim made himself the Demon Lord and set his plans to revive the Demon King in motion. Ghirahim sent demon hordes on the surface to locate Hylia's mortal incarnation.[10] Eventually Ghirahim succeeded in reviving Demise; however, Link defeated Demise and the demon race disappeared from the earth.[11]

In the Era of Light and Dark, Agahnim used his powers to send people to the Dark World. Anyone sent there became a demon, except Link, who possessed the qualities of a hero and instead became a pink bunny (until he found the Moon Pearl, which allowed him to remain in human form in the Dark World).[16]

At some point after the defeat of Agahnim, demons infested Labrynna, and attacked Impa shortly before Link awoke to help her.[17]

Demons also appeared in the Wind Fish's dream, and attempted to prevent Link from ending the dream by waking the Wind Fish.[18]

In the Era of Decline, following his resurrection, Ganon attacked the kingdom of Hyrule with his demon army and stole the Triforce of Power.[19][20]

Although Link managed to defeat him, his followers remained in the area planning to resurrect their master by sacrificing Link and sprinkling his blood over the ashes of the Demon King.[21]

In the Twilight Era, Zant was given magical powers by Ganondorf, which he used to transform the Twili, the inhabitants of the Twilight Realm, into demons.[22] He used this army of demons to attack Hyrule.[23]

In the Shadow Era, a reincarnation of Ganondorf used the Dark Mirror to create demonic copies of Link, known as Shadow Links. If this mirror is used by an evil person, it reflects their heart and creates demons.[24] This new Ganondorf used the power of the Trident to turn the Knights of Hyrule into demons.[25] With the knights now demons and the Royal Jewels turned into gates to the Dark World, demons returned to Hyrule again.[26]

In the Era of the Great Sea, the Forsaken Fortress (known as the Demonic Beast Island in Japanese) served as Ganon's base, and was inhabited by many demons.[27]

It is possible for demons to turn into humans. In Skyward Sword, Gratitude Crystals can be used to turn Batreaux into a human.[28]

Likewise, humans can turn into demons. Ganondorf, originally a Gerudo, became the demon king after claiming the Triforce of Power during the events of Ocarina of Time.[29]

Anyone Agahnim sent to the Dark World became a demon, except Link, who possessed the qualities of a hero and instead became a pink bunny (until he found the Moon Pearl, which allowed him to remain in human form in the Dark World).[16]

The reincarnation of Ganondorf, also originally a Gerudo, became the demon king after claiming the Trident. This Ganondorf then turned the Knights of Hyrule into demons with the Trident's power.[25]

Other races can also become demons. Vaati, who was originally a Minish, became a demon after draining the Light Force.[30]

The Twili were turned into demons by Zant, using the magical powers bestowed upon him by Ganondorf.[22]

Demise, who had existed eternally,[3] was the origin of evil and the source of all monsters.[4] The Hyrule Historia references other demon kings that existed prior to Skyward Sword, meaning that there were more alongside Demise, prior to being wiped out during the ancient wars.[31][note 1]

Demise, Ganon, and Malladus have all held the title of demon king. Demon kings are generally depicted as requiring specialized weapons such as Silver Arrows to kill. Rather than getting killed, demon kings can be merely imprisoned. Due to the inability to permanently eliminate the demon king (due to the existence of resurrection) the title is seemingly retained after death.[21][32]

Demise is the imprisoned demon king who was the origin of evil and all monsters.[3][4]

Ganon is a former Gerudo who turned into the demon king upon claiming the Triforce of Power in Ocarina of Time. Four Swords Adventures features another incarnation of Ganondorf[33] who became a demon king after obtaining a powerful Trident from the Pyramid. Ganondorf is confirmed to be a manifestation of Demise's hatred.[34][35]

In A Link Between Worlds, Yuga fuses with Ganon, taking on the form of Yuga Ganon.

Shadow Link is a demonic reflection of the Hero created from the Dark Mirror by Ganon.[36]

Malladus is an ancient demon king that terrorized the land that eventually became New Hyrule, so was locked away beneath the altar atop the Tower of Spirits by the Spirits of Good after a long war.

The Demon Train is a form of Malladus in Spirit Tracks, during a phase of the final battle with him.

Chancellor Cole is a demonic servant to Malladus who posed as a human to gain influence in the court of New Hyrule.

Skeldritch is an ancient skeletal Demon that resides in the Sand Temple.

Ghirahim is a Sword Spirit and demon lord who is posing as a human.

Majora's Wrath, the final form of the being that inhabits Majora's Mask, is a Demon.

Bellum is a squid-like phantom Demon that attempts to drain Life Force.

Vaati is a Minish that became a Demon after draining the Light Force.

Batreaux is a Demon who wishes to be Human so that he does not scare people. With Link's Gratitude Crystals, he is able to turn into a human.

A Vire is a Demon composed of multiple Keese.

Uncle Rupee is a Rupee-shaped Demon that appears in Freshly-Picked Tingle's Rosy Rupeeland that turns people into Tingles and promises he will allow them into Rupeeland, a supposed paradise, if they gather him enough Rupees.

In the Four Swords manga by Akira Himekawa, many Demons appear, the manga also refers to Stalfos, Moldorms, several dragon creatures, and the Big Poe as Demons.