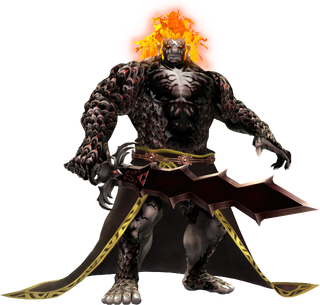 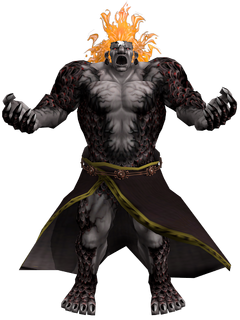 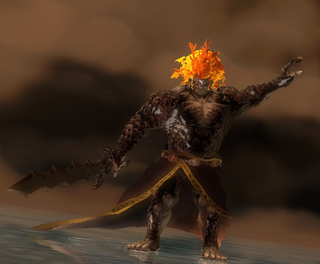 Demise is the overarching antagonist of The Legend of Zelda series and the central antagonist and final Boss of Skyward Sword.[4]

Long ago, he and his horde of demons broke through a fissure in the earth and sought out the Triforce. However, he was defeated and sealed away by the Goddess Hylia and, after the events of Skyward Sword, by Link through the use of the Master Sword. Upon his defeat, Demise makes a claim that his hatred will not end, but will be reborn in the coming ages. The form of this evil is thought to be Ganon. Hyrule Historia specifically mentions that his flaming red hair is to signify a connection to him.[5]

Demise was an eternal entity who had conquered time itself.[6] When the Golden Goddesses departed from the world, they trusted their ultimate power, the Triforce, in the hands of Hylia to protect it.[7] However, Demise, wanting the Triforce to make the world his own, gathered an army of monsters and together launched an attack against the people of The Surface, murdering them and causing misfortunes to get their hands on the power guarded by Hylia.[8][9]

To prevent the great power from falling into the hands of Demise, Hylia and the five tribes who lived on the Surface joined forces and fought back against the Demon King and his forces in a war, which would ended with Demise sealed away and peace restored to the land.[10] Due to the seal placed upon him, he assumes the monstrous form as The Imprisoned for the majority of the plot.[11]

Ghirahim, who is actually the spirit of Demise's Sword, pursues Zelda to steal her soul and thus resurrect Demise, who is his Master.[12] Meanwhile, Demise attempts to break free of his seal by his own means in the form of The Imprisoned, but he is constantly repelled and re-sealed beneath the Sealed Grounds through the efforts of Link and Groose. When Link finally obtains the Triforce, he manages to kill Demise by driving the Statue of the Goddess from Skyloft into the Sealed Grounds as The Imprisoned awakens for the fourth time. However, Ghirahim kidnaps Zelda and takes her to the past through the Gate of Time in the Sealed Temple, where he begins a ritual to revive his master.

While Link manages to defeat Ghirahim, he is too late to stop the resurrection of Demise. The Imprisoned begins to absorb Zelda's soul and eventually transforms into the Demon King himself. Ghirahim welcomes back his master,[13] but Demise pulls a dark Sword out of Ghirahim and seals his entity within the weapon. Demise continues to absorb the soul of Zelda to gain unstoppable power; he is impressed with Link's determination to protect the goddess and invites him to do battle.[14][15][16] To Demise's shock, Link manages to defeat him, but in his dying throes, he warns Link that it is not over, and that an incarnation of his hatred will be reborn as a being to pursue domination of the world, as well as those with the blood of the Goddess and the spirit of the Hero, in a cycle of rebirth.[17] Demise is sealed away within the Master Sword, where his remains begin to decay.[18]

Demise carries a cocky, overbearing temperament,[19] and will stop at nothing to prove his power to any who defy him.[15][20][21] Fi describes Demise as "the source of all monsters," and states that he "has conquered time itself."[6] Demise bears a strong resemblance to Ganondorf: large stature, fiery red hair, dark skin, and even his facial features are similar, and in the cutscene before the final battle with him, a variation of Ganon's leitmotif plays.

After Link enters the chosen battlefield through the portal in the past, Demise praises him for his courage,[22] but tells him that when he falls,[23] he shall rule over everything in the world.[24] After Demise states that he will eventually acquire the Triforce and rule the world with it, the battle begins.[25]

Striking Demise through his guard can be difficult, as he will attempt to block every attack Link makes.[26] Additionally, Link's Skyward Strike is unavailable as the power of the Goddess is negated by Demise's personal battlefield.[27] Link can quickly defend himself with a Shield Attack when Demise attacks with his Sword, then follow up with a vertical attack or Spin Attack. Eventually, Demise will be thrown backwards, seemingly defeated, but will then rise up and summon a storm. Demise can draw the lightning from the storm to charge his Sword with electricity. Link will now be damaged if he strikes the Sword and Demise will cause twice as much damage as before. Demise is now able to perform his own variation of a Skyward Strike, after which he is forced to recharge his Sword by pointing it skyward. It is possible to defeat Demise by attacking him before he can recharge his blade, but it is easier to mimic Demise and point the Master Sword to the sky. This will charge the Master Sword with electricity from lightning bolts, allowing Link to attack with a Skyward Strike and paralyze Demise, making him vulnerable to attack.[28]

Eventually, he will fall back again, allowing Link to finish him with a lightning-charged Fatal Blow. However, Demise will usually dodge the attack at first, and sometimes the second. If Link is quick enough to land the second attack or attempts to land the third, the battle ends.

Throughout Skyward Sword, Ghirahim pursues Zelda in attempt to revive Demise from his imprisonment. As Link progresses farther in the game, Ghirahim's appearance begins to gain dark marks in several places. In the final stretch, in order to fully revive Demise, Ghirahim takes on his true form which bears great resemblance to Fi, strongly emphasizing that he is in fact the spirit of a sword. When Demise is fully revived, he summons the sword from Ghirahim, his true form, and Ghirahim is sent into the sword. In the end, when Demise is defeated, the sword dissolves, likely taking Ghirahim with it.

The blade is significantly larger in comparison to the Master Sword. It is capable of sending Link flying backwards in one strike and when lifted in the air during the presence of a severe thunderstorm, it can absorb lightning bolts to charge up and send electric shocks when stricken with a metal object, as well as beams.

In Super Smash Bros. for Wii U, Demise appears as a Trophy.