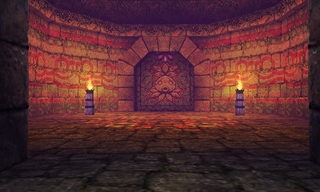 Deku Palace
Southern Swamp
The Deku Shrine is a location in Majora's Mask.[1][note 1]

The Deku Shrine is located on the west side of the Deku Palace. The entrance, however, is initially blocked by a Big Octo. It is not until Odolwa has been defeated in the Woodfall Temple and the Southern Swamp's waters return to their normal state that Link can enter it. The Deku Butler appears here after Link brings the Deku Princess back to the Palace and, as thanks, tells the young hero that a reward awaits him at the end of the Shrine. As the Butler guides Link, a race begins.

The inner part of the Deku Shrine is a labyrinth full of traps and dead-ends, along with a large amount of Mad Scrubs that do not attack Link. Here, Link must "race" the Deku Butler by keeping up with him until the end of the obstacle course. If Link falls too far behind, the doors connecting the Shrine's different segments will begin to close until Link is trapped within, rendering him unable to catch up. The minigame is also failed by falling into a chasm at any point along the way. Masks such as the Bunny Hood will increase Link's speed, thus making the race easier.

If Link succeeds and reaches the end of the Deku Shrine, the Deku Butler will reward him with the Mask of Scents and apologize for trying too hard to outrun him.[3] The only way to exit the Shrine is through a magic portal that appears alongside the Butler immediately after being granted the Mask.

A few changes were made to the Deku Shrine in Majora's Mask 3D. If Link reaches the end of the Deku Shrine in another cycle after getting the Mask of Scents, the Deku Butler will give him a Fishing Hole Pass,[4] and the maze of Flame Walls was replaced with iron grates.