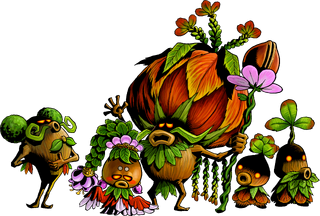 Deku Butler (servant)
Deku Princess (princess)
The Deku Royal Family is the presiding body of the Deku Kingdom that appears in Majora's Mask.[1][2]

The Deku King and his daughter, the Deku Princess, make up the ruling monarchs, and are served faithfully by the Deku Butler and the palace guards. While he was alive, the Deku Butler's Son undoubtedly served at the palace as well. They inhabit the Deku Palace of the Southern Swamp, the southernmost region of Termina.

The Deku Royalty apparently possess absolute judiciary power in their Kingdom, as demonstrated by the Deku King's merciless punishment of the Monkey accused of kidnapping the princess.[3] The palace guards are equally quick to obey the commands of the princess.[4] The Deku Royal Family also appear to be the kingdom's spiritual leaders: they are the only Deku allowed inside the hidden Temple at Woodfall.[5] According to the Deku King, only the Deku Royal Family may learn the "Sonata of Awakening" needed to reveal the Temple's entrance.[1] This is undoubtedly why the Deku Princess had taken up learning the Deku Pipes.[6][7]