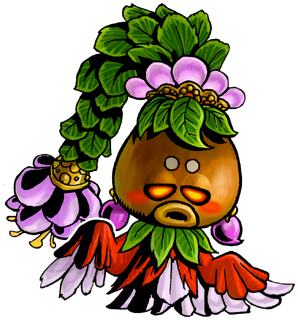 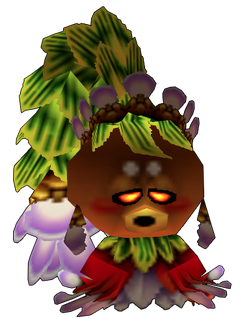 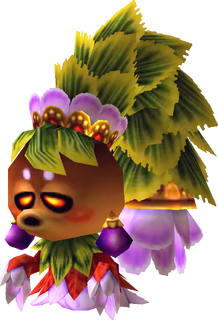 The Deku Princess is a character and an item in Majora's Mask.[1]

The Deku Princess is the heiress to the Terminan Deku throne. She resides in the Deku Palace with her father, the Deku King.

Upon seeing the Southern Swamp filling with poisonous water, she headed to the Woodfall Temple with her friend, the Foolish Monkey. However, she was captured by Odolwa and put into a room near the entrance of the temple.[2] When her absence is noticed, her father accuses the Monkey of abducting her, and imprisons him with the intent of punishing him.[3]

Eventually, Link gains access to the temple and defeats Odolwa. He finds the Deku Princess in a chamber near the temple's exit and rescues her, returning her to the Deku Palace by temporarily storing her in a Bottle.[4] When the Princess realizes what her father has done to the Monkey, she is furious. Upon returning to the palace, she demands the Monkey's immediate release.[5] She apologizes to the Monkey for her father's hasty decision and,[6] as a sign of gratitude to Link, shows him the way to the Deku Shrine to receive his reward on behalf of the Deku tribe.[7] The Deku Princess is last seen during the ending credits alongside the Deku King, the Monkey, and the palace guards.

In the Majora's Mask manga by Akira Himekawa, she appears to have a crush on Link in his Deku form. The Deku Butler says Link looks like his Son in that Mask, and that the Princess was in love with his son.

In Cadence of Hyrule, the Deku Princess is a minor character who can be found in Deku Village in the Future World if the player has downloaded the Symphony of the Mask content pack. If any of the protagonists talk to her enough, they will ask her if she would fit in a bottle, which she takes offense to.