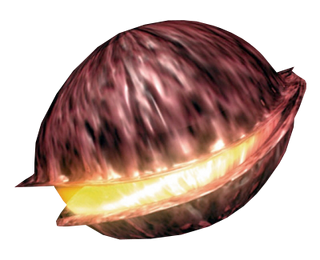 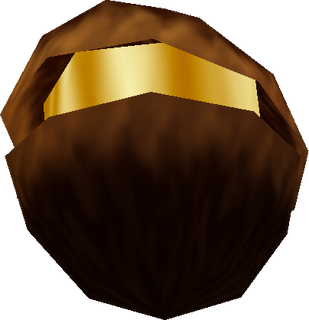 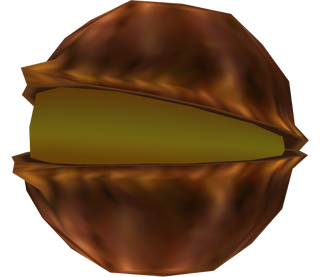 Deku Nuts are the dried buds of Deku Babas. Although defeating Deku Babas is the most common source of these items, they can also be found on certain other enemies, in trees, and in jars as well. In Ocarina of Time, they are usually for sale in shops at 15 Rupees for five units.[4] Business Scrubs will offer to sell some at a higher price than shops, at five Deku Nuts for 20 Rupees.[5]

Throughout Ocarina of Time, Link can use Deku Nuts to temporarily stun enemies (which is indicated by a blue skin that filters over the enemy). When a Deku Nut collides with the ground, it lets off a large flash which freezes enemies caught in the flash.[6][7] Oddly enough, even Ganon may be injured by Deku Nuts.

Deku Nuts are the weapons of Deku Scrubs, which spit them from their snouts. However, the Deku Nuts utilized by Deku Scrubs do not explode on impact, and instead simply deal damage and crumble. That being said, Deku Link is able to drop Deku Nuts while flying using a Deku Flower, which have the same effect as throwing them. Besides being used for battle, Deku Nuts also hold aesthetic value for the Deku Royal Family in particular, as the Deku King's scepter is adorned with a large Deku Nut on top.

Deku Nuts appear in The Minish Cap as projectiles spit by Business Scrubs. Link can deflect them with his Shield, and they will stun the Business Scrubs who fired them.

In Twilight Princess, Deku Nuts appear as objects and can be picked up from deceased Deku Babas and thrown like jars or rocks.[8] They will not explode or produce a flash, but instead will yield Deku Seeds, which can be used with the Slingshot.

In Ocarina of Time, it is possible to increase the maximum number of Deku Nuts Link can carry in his inventory. The first upgrade increases the amount from 20 to 30.[9] The second raises it from 30 to 40.[10] These upgrades can be obtained in any order.

The first upgrade is obtained as a child by entering the Forest Stage while wearing the Mask of Truth (additionally, the Deku Scrubs will refill the supply of Deku Nuts).[11] In the Nintendo 64 version of Ocarina of Time, due to a glitch, if the upgrade is not acquired before Link obtains the Poacher's Saw from the Trading Quest, it becomes impossible to receive the upgrade. This was fixed in Ocarina of Time 3D.

The second upgrade can be purchased for 40 Rupees from a Business Scrub in the Lost Woods, just outside the Sacred Forest Meadow entrance.[12] The Bomb Bag is required.

Deku Nuts appear as an item in Super Smash Bros. Brawl. When thrown, the Deku Nut explodes upon contact, stunning any nearby fighter. It also causes approximately 18% worth of damage. Deku Nuts also explode after a while if ignored while on the ground. They also appear as a Trophy and as a Sticker.

Deku Nuts reappear as throwable items in Super Smash Bros. for Nintendo 3DS / Wii U. They also appear as Trophies.

In Hyrule Warriors Legends, Deku Nuts appear as Plant-type Food. They are imbued with the Lightning Element. When consumed by a Companion Fairy in the Dining Room of the My Fairy mode, Deku Nuts can increase the Fairy's Trust level and personality traits.

Deku Nuts are Throwing Items in Super Smash Bros. Ultimate. They behave identically to their past appearances.