Zelda Wiki
Register
Don't have an account?
Sign In
Advertisement
in: Items, Deku, Items in The Wind Waker,
and 4 more
English 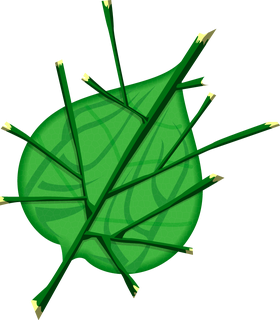 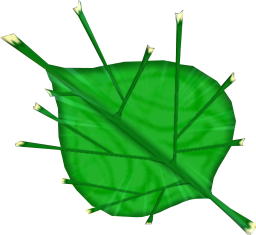 Gliding
Creating a puff of wind

The Deku Leaf is a recurring item in The Legend of Zelda series.[1]

The Deku Leaf is obtained in the Forest Haven from the Great Deku Tree, after the wise Earth Spirit had to interrupt the Korok ceremony because of Makar getting lost in Forbidden Woods. The Leaf is near the top of the Great Deku Tree, so Link must hop from Baba Bud to Baba Bud, and make occasional use of the Grappling Hook, to reach there.

The Deku Leaf can be use in two ways. Its first function is that of a makeshift fan. When used on the ground, Link fans it very hard, causing a strong puff of wind to blow forward. This air puff can be used to blow apart piles of leaves, stun enemies, and turn pinwheels. However, it cannot go through walls or other objects, and once it hits its target, it stops moving and dissipates instantly. The air puff's usefulness is also detained in the fact that if Link has no Magic Meter, the leaf wilts and cannot be used. The air puff itself, however, does not use any Magic Power.

The Deku Leaf's more important function is that of a glider. After jumping off of a ledge, using the items results in Link holding the leaf above his head and can glide for long distances. Combined with a Baba Bud launch, Link can move vast distances with it. However, it drains Magic Power, and if Link is outside, he will need the wind to go in his gliding direction to move faster. If Link runs out of Magic, the leaf wilts, causing Link to fall straight down.

In The Wind Waker HD, when Link glides with the Deku Leaf, a glowing marker appears on the ground below him, which derives from the Tingle Tuner marker from the GameCube version. This makes it easier to determine where he will land.

In Hyrule Warriors when using the Spear weapon, Lana is capable of having it transform into various different forest themed weapons, one of them being the Deku Leaf. She can attack enemies with it by creating a gust of wind, and she can also jump into the air and glide with it. While gliding, standard attacks allow her to perform a sweeping kick attack, which can be done twice in a row. Players are also able to transform her the leaf back into her spear, and create a magic rune to create a water based explosion to damage enemies directly below her.

Toon Link also uses the Deku Leaf when using his Light Sword Weapon to attack enemies after flipping in the air.

In Hyrule Warriors Legends and Hyrule Warriors: Definitive Edition, the Deku Leaf also appears as an Item Card in the Great Sea and Master Wind Waker Maps in Adventure Mode. The Deku Leaf can be used to spin windmills, which will unlock a secret Reward.