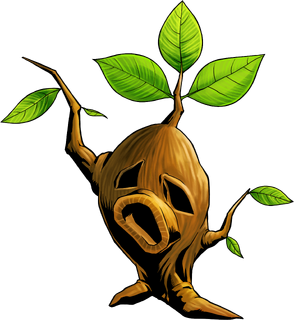 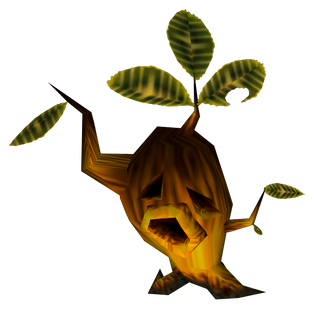 The Deku Butler's Son is a character in Majora's Mask.[1]

The Deku Butler's Son is first seen at the beginning of the game as a dead twisted tree in the Portal between Hyrule and Termina, just before the tunnel that leads to the Clock Tower. The Deku Butler's Son died there and his soul was turned into a Mask by the Skull Kid to curse Link into having the body of a Deku Scrub.[2][3] After reaching Clock Tower for the first time, it is not possible to return to see the Deku Butler's Son again under normal circumstances due the closing of the interdimensional seal between Hyrule and Termina. After leading Link to the Mask of Scents, the Deku Butler apologizes to Link for traveling so fast, stating that Link reminds him of his son, whom he used to race with through the Deku Shrine.[4] During the New Day, the Deku Butler is seen mourning at his son's remains.

His soul resides within the Deku Mask. His original body is replicated whenever Link plays the "Elegy of Emptiness" while wearing the Deku Mask.