Zelda Wiki
Register
Don't have an account?
Sign In
Advertisement
in: Enemies, Common Enemies and Traps, Babas,
and 10 more 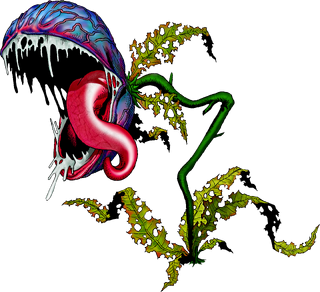 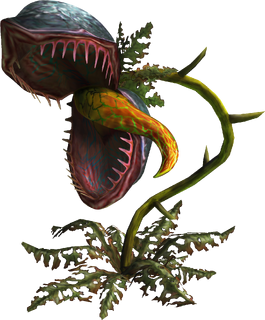 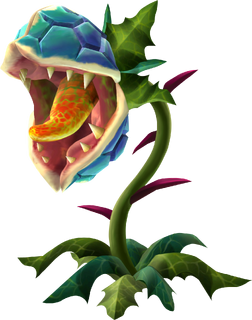 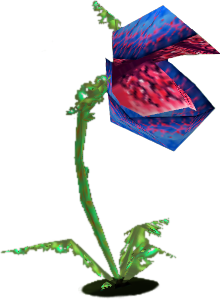 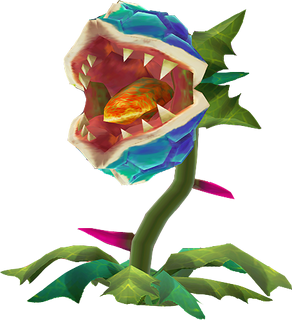 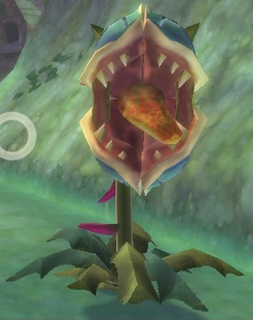 Jelly Blob
Deku Babas are recurring Enemies in The Legend of Zelda series.[1] In each incarnation, they are carnivorous plants akin to Venus Flytraps that attack passersby, should they come too close.

Deku Babas commonly appear in heavily wooded areas in Ocarina of Time. When approached, they will rise from their base and periodically lunge at Link. However, they have a limited range. If they are struck while lunging, they will stiffen straight upwards, allowing Link to kill them and retrieve Deku Sticks. Given enough time, they will return to their arched position and resume their attack. If struck again, they will die, leaving behind a Deku Nut from the bud.

A "withered" variant also appears, unable to curl their stems, relying on Link to walk into them for damage. After rising from the base, they will eventually pivot in a small circle to increase their range. Deku Babas are especially common in the Lost Woods (particularly Kokiri Forest, the Forest Temple and Inside the Deku Tree).

A much larger version of a Deku Baba can be found, known as a Big Deku Baba. Its attack patterns are the same as the normal variant.

Deku Babas in Majora's Mask function identically to those in Ocarina of Time, dropping Deku Sticks and Deku Nuts when defeated, depending on how they are killed. They appear in places such as Termina Field, the Southern Swamp, Woodfall and even the Stone Tower Temple. A smaller variant also appears, known as a Mini Baba, consisting of just the bud and leaves at its base. Another variant is also found, Bio Deku Babas, which hang from lily pads and gain increased mobility when severed from them.

Deku Babas only lunge at Link when he approaches them in Twilight Princess, otherwise, they retract inside their base. They are often encountered within patches of tall grass, or on ceilings, making them difficult to see until Link draws near. Unlike the previous incarnations, these Deku Babas possess a set of sharp teeth with which they can bite Link. They are found in places such as Faron Woods, the Forest Temple, Hyrule Field and the City in the Sky. When slain, they leave a seed case that can be broken to retrieve Seeds that can be used with the Slingshot.

Several variants of Deku Babas appear in Twilight Princess, such as the Baba Serpent, which is a more aggressive relative that continues to attack Link even when severed from its roots, and Big Babas, which appear to have a symbiotic relationship with Deku Likes. The Boss Diababa also resembles a Deku Baba, both in appearance and in name.

Shadow Deku Babas are Deku Babas transformed by the power of the Twilight. They act identically to their regular counterparts. The only difference between the two is that upon being killed, Shadow Deku Babas will not leave seed pods on the ground. Instead, they will just explode in a similar fashion to other enemies corrupted by Twilight.

There are also version of the Shadow Deku Baba that behave similarly to Baba Serpents.

Deku Babas in Skyward Sword require a different strategy with the Sword than previous titles. There are three variants. One opens its mouth horizontally, another vertically, and the last is found upside-down on ceilings. Deku Babas will only take damage if Link slashes in the same direction that the plant's mouth opens.[2] As such, slicing vertically while the Deku Baba has its mouth open horizontally will not be effective. Furthermore, the Deku Baba only takes half damage with stab attacks, even with the Master Sword, and will try to dodge if Link stabs. However, they will not dodge if Link attempts to hit them with a Skyward Strike stab.

Deku Babas can also be defeated using Bombs. Rolling, throwing or placing a Bomb close to a Deku Baba will tempt it to swallow it,[3] causing the Bomb to explode inside the Deku Baba and kill it. In addition to this, Link can also cut the stem of a Deku Baba with the Beetle,[4] or by performing a Spin Attack after a successful Shield Bash. When defeated, Deku Babas occasionally drop Jelly Blobs.

A golden relative of Deku Babas, known as Quadro Babas, appear later in the game. True to their name, their bud is split into four sections, allowing them to change which way their mouth parts. They do this often in an attempt to confuse Link.

Deku Baba appears as a cameo in other Nintendo series.

For more information, visit the Cameos of The Legend of Zelda page.

Deku Babas make an appearance in the Ocarina of Time manga by Akira Himekawa, attacking Link when he has returned to Korki Village, just like in the game. Link easily defeats them, saving Mido from one in the process.

In Hyrule Warriors, Deku Babas appear as giant stage obstacles, often guarding key points of the battlefield by blocking the way. They emit a poisonous miasma,[5] hurting anyone getting close to it. They can only be defeated with the Bow, as they will retract into their roots if any other kind of attack is attempted.[6][7] They will usually drop many Rupees once defeated. They appear primarily in the Scenario, "The Sorceress of the Woods", where the Bow is first found, necessitating its obtention.