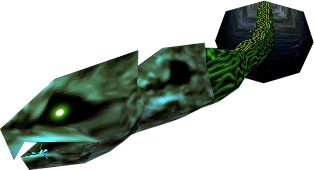 Deep Pythons are giant sea snakes that infest the Great Bay,[3][4][5][6] lurking in the depths of Pinnacle Rock. The Deep Pythons are guarding some of Lulu's missing Eggs, which the thieving Gerudo Pirates lost to when they were attacked,[5] as well as a Seahorse.

When Link draws near, they shoot out of their burrows to grab him in their mouths and damage him before spitting him out. To defeat them, Zora Link must swim close to lure them out of their burrow, and stun and destroy them with his Electrical Shield or Boomerang Fins.