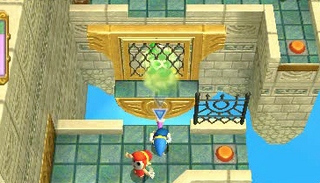 Deception Castle is a Level in Tri Force Heroes.[name reference needed] It is the second Level of the Sky Realm Area, preceded by Floating Garden and followed by Dragon Citadel.

Deception Castle, as its name suggests, takes place in a decrepit, castle-like structure in the sky with several mechanisms, machines, and grated fans strewn about.

Stage 1 starts the Links on an elevated portion of a floating castle-like structure. Left of them are two Gripshots and a Gust Jar, while a few Pots rest behind them. Picking up the items causes the Triforce Gateway to activate. A Bomb Soldier and a Spear Soldier also appear on a larger platform below them, the former of which rides one Totem Armos, while the latter rides two. Lastly, three large windows open behind the Soldiers, releasing strong winds that threaten to blow the Links off of the Stage. Once both enemies are defeated, the windows close and a door to the northeast opens, allowing the Links to proceed. The platform ahead holds two Hearts, a few pots, and a Switch, while two more Switches can be seen across a gap. In order to reach them, the Links with the Gripshots must use them to attach to the nearby grate one-by-one, then the Link with the Gust Jar must blow them each forward, to a platform ahead. There, the second Switch and a blue Rupee can be reached, and in order to reach the final Switch, the two Links must Totem so the top one can Gripshot a second, moving grate. The grate will take him to the platform on which the third Switch and a red Rupee can be found. When all three Switches are stepped on simultaneously, platforms appear that allow the three Links to reunite and reach the activated Triforce Gateway.

Stage 2 places the Links on a platform attached to a grated fan. The Links can use the air current being produced to reach a higher, spinning platform. Once they all get to it, several enemies appear: two Crows, a Ball and Chain Soldier, a Bomb Soldier, and a Spear Soldier. The Soldiers all stand on far platforms and cannot be reached with the Sword. The Bombs thrown by the Bomb Soldier can be thrown at the other enemies in order to damage them. The Bomb Flower growing in front of the Ball and Chain Soldier can also be pushed at him using the Gust Jar, or grabbed with the Gripshot and used. Another Bomb Flower also grows nearby. The Bomb Soldier is on a higher platform, but a third Bomb Flower grows in front of him, so a Link atop a full Totem can use it to attack him. Once every enemy is defeated, the Triforce Gateway appears in the middle of the platform. Using a two-Link Totem, a silver Rupee, an Energy Potion, and a Heart can be reached with the Gripshot, while a single Link can use it to grab lower Hearts, an Energy Potion, and a red Rupee.

Stage 3 tasks the Links with navigating a series of teetering platforms high above the sky. Without anything on them, the platforms are stable, but if more weight is on one side than another, it will lose balance, causing whoever is on the lower side to fall off if they stay there for too long. The Links either need to move quickly or work together and balance the platforms in order to proceed ahead. A blue Rupee to the right can be grabbed with the Gripshot, and a Heart to the left can be grabbed the same way. If one Link is unable to get across the platforms, he may use the Gripshot to reach a Link who has already gotten across. The Gust Jar can also be used to propel the Links across. Ahead of the first platform is a small, stone platform with a Heart, a blue Rupee, and a red Rupee on it, and another teetering platform ahead of that. Two Beamos sit on elevated columns nearby, and will shoot at the Links if they are too close and in their line of sight. Once all of the Links reach the stone platform ahead, two more connected teetering platforms can be seen, along with four Mini-Margos, two on each side of them. A locked door lies on a final stone platform ahead, and two Bomb Flowers grow on floating platforms to the right. A Link with a Gripshot must board the right platform, grab a Bomb Flower, and throw it to the Link on the left platform, who must then throw it into the Mini-Margos when they are close enough. The Link with the Gust Jar must also use it to blow the second Bomb Flower into the Mini-Margos on the left when they are in place. Destroying all four Mini-Margos causes a Key to appear between the two platforms. In order to reach the door, the Link with the Gust Jar must be thrown, and the remaining Links can Gripshot onto him. Unlocking the door reveals a Squiddy and the Triforce Gateway.

Stage 4 is the final Stage. It places the Links on a stone pathway that leads to the arena in which Gigaleon is fought. Pots can be found on this path. Once all of the Links reach this arena, the mini-boss appears and the path behind them falls. Pots, Hearts, and an Energy Potion can be found on this platform as well as on the pillars around it. Several Bomb Flowers grow on two platforms on either side of the arena, which are necessary to defeat Gigaleon, however these platforms fall midway through the battle. Four grated fans are also on each corner of the arena. Once Gigaleon is defeated, three more grated fans appear ahead, allowing the Links passage to a stone platform on which the Triforce Gateway appears.

Deception Castle includes the following Drablands Challenges: "Clear within the time limit!", "Don’t fall at all!", and "Don’t pop any balloons!".

During the Drablands Challenges, different, more difficult enemies appear throughout the Level.

In "Clear within the time limit!", the Links must complete the Stage within a limited amount of time. While initially given one minute and thirty seconds, hourglasses can be picked up around the stage to increase their remaining time. If a Link falls, the Stage is reset, but the time is not. If the time runs out, the Links receive an immediate Game Over.

In "Don’t fall at all!", the Level is unchanged, however, if any Link falls down a pit, it counts as a KO: a Fairy is lost and the Stage is reset.

In "Don’t pop any balloons!", several balloons float around the Level. If even one is popped, it counts as a KO: a Fairy is lost and the Stage is reset.

Castles in The Legend of Zelda series
Community content is available under GNU Free Documentation License unless otherwise noted.
Advertisement