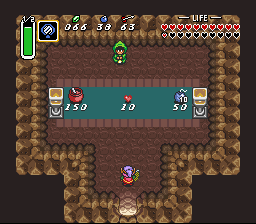 The shop is one of the more obscure locations in the game, and like the other shops in the Light World, it need never be visited in order to complete the game. In order to reach it, Link must possess the Magic Hammer and travel due East from the Tower of Hera. After crossing the bridge and pounding down the pegs on the other side, Link will be able to explore a previously inaccessible portion of the mountain. To the East lies a Magical Warp Tile that will transport him to the Turtle Rock area of the Dark World. However, if he instead goes South, he will find a series of caves. All the caves at the base of this section of the mountain are obstructed by large stones which require the Titan's Mitt to lift, except for one. If Link enters that cave and bears left, then he will come across a cracked wall which if bombed will lead him to the Death Mountain Shop.