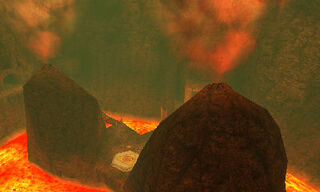 It can be accessed from the top of Death Mountain or through an ancient Goron pathway that leads from Darunia's room in Goron City. The crater is the location of the Fire Temple and home to the ancient dragon Volvagia.

The heat of the crater is too intense to be in for very long unless the Goron Tunic is being worn.[3] Without this tunic, Link only has a limited amount of time to stay in the crater, otherwise he will burst into flames and die as soon as the timer runs out.[4] The amount of time Link can remain in the crater is dependent upon how many Heart Containers Link possesses. Also as a child link, the bridge to Fire Temple is blocked by three gray rocks, that he cannot destroy with bombs alone.

After Link receives the Goron Tunic from Darunia's son and enters Death Mountain Crater for the first time, Sheik will appear in front of him and teach Link the Bolero of Fire, which allows him to immediately transport back to the crater at any given time. The Bolero of Fire is needed to access the middle portion of the crater as young Link.

The Great Fairy of Wisdom also resides in the Great Fairy's Fountain on the western portion of the volcanic area, but its entrance is blocked by giant boulders that can only be removed with the Megaton Hammer. Once Link enters the fountain, he meets the Great Fairy within it who doubles his Magic Meter.