"Take a good look at that mountain. That is Death Mountain, home of the Gorons."
— Impa

) is a recurring location in the Legend of Zelda series. A huge mountain or mountain range that is typically the highest geographical point of Hyrule, Death Mountain has become a well known location within the series, and serves as the homeland of the proud Goron race in most games. Occasionally, entry to Death Mountain is restricted; one must receive permission from the Royal Family of Hyrule to enter the mighty mountain. It is generally believed that the name Death Mountain is used for many different mountains in the series, but because some of its appearances share certain geographical or topographical similarities, some Death Mountains are believed to be one and the same.

Death Mountain is found in southwestern Hyrule. This mountain range is home to a maze-like network of caves full of ravenous enemies that Link has to pass through. Link can find the Hammer deep inside.

"DANGER! Do not enter Death Mountain without the king's permission!"
— Sign

Death Mountain is found in northwestern Hyrule and is home to three of the game's dungeons: Tower of Hera in the Light World, and Ganon's Tower and Turtle Rock in the Dark World. The mountain is inhabited by Tektites, Lynels, and Boulders. There is a Lost Old Man living on Death Mountain as well. Traditionally, one needs the King's permission to enter the mountain, but the good king has been dethroned by Agahnim. In order to enter Death Mountain in the Light World, a huge stone that blocks the entryway must be lifted with the Power Glove. In the northwestern area of the mountain is Spectacle Rock. Though no lake is actually seen on Death Mountain itself, there is a waterfall in the northeastern corner of Hyrule which, judging from its position, most likely comes from a body of water on Death Mountain. The waterfall flows into a river which flows into Lake Hylia.

The volcanic Death Mountain is located in the far northeast reaches of Hyrule. Most of the exterior mountain area is known as the Death Mountain Trail. The Fire Temple, the second dungeon in the future Hyrule, is located inside the Death Mountain Crater at the very top of the mountain. The Gorons also live on Death Mountain, inside a four-story cave network called Goron City. Their rock supply comes from Dodongo's Cavern, the entrance to which was blocked off by Ganondorf. Like nearly all incarnations of Death Mountain, this one is inhabited by Tektites and contains falling boulders. The smoky clouds that always surround the peak of Death Mountain reflect the state of the mountain: when the clouds are white, all is at peace; when the clouds turn a fiery red, the mountain is facing perilous times. Also, after the seven years in which Link was asleep, because it holds the Fire Temple (that became corrupt due to Ganondorf's reign of terror on Hyrule), Death Mountain Trail became one of the areas with perpetual eerie dark clouds overhead, not unlike the destroyed Hyrule Castle Town. Once Link cleanses the Fire Temple and receives the Fire Medallion, the dark clouds and the fiery cloud ring disperse, and Death Mountain returns to normal.

This version of Death Mountain is a volcanic mountain range. The Links go through Death Mountain as the third stage of the game, where they battle Gouen to find the last Great Fairy, the Great Fairy of Flame, and get the last Key needed.

Death Mountain is located directly north of Hyrule Castle. It is the third level of the game, and it contains three stages: Death Mountain Foothills, The Mountain Path, and the Tower of Flames. As in other levels, Tingle's Tower will appear in multi-player mode. In a single-player game, Tingle will occasionally appear in an attempt to collect Force Gems. After Link has completed all three stages and defeated the Dodongos, the Green Maiden is rescued.

"Are you trying to reach the Gorons of Death Mountain? It is far too dangerous, Link!"
— Renado

Death Mountain is located in the far east of Hyrule, in the Eldin Province. A landmark of Hyrule visible from several locations, it is home to the Goron race. The Death Mountain trails are only passable with the help of the other Gorons, being this is the only way to get to the very top of the mountain. Death Mountain has a Hot Spring along with a small shop run by a Goron. Death Mountain erupts until Fyrus is defeated. Link later uses a large volcanic rock from the eruptions to thaw the frozen Zora's Domain. Inside Death Mountain is a large, complex mining system known as the Goron Mines, which is filled to the brim with steam and lava. Death Mountain is accessible by a trail from Kakariko Village. Link cannot go up this trail until he has acquired the Iron Boots because there is a Goron guard that will not let him pass. The music that plays in the Death Mountain area is a reworked version of the Goron City theme from Ocarina of Time.

Later in the game, several Zoras can be found on Death Mountain and soaking in the Hot Springs.

As in A Link to the Past, Death Mountain is located in northwestern Hyrule. The Tower of Hera and Rosso's Ore Mine are found on the Hyrulan Death Mountain. When Link enters the Hyrule Death Mountain, there will be falling rocks across the mountain due to a volcano eruption. The Bouldering Guy can be found here after Link has retrieved the Message in a Bottle.

"What? You don't know about Death Mountain?! On a sunny day, you can see the volcano from anywhere in Hyrule! Us Gorons eat rocks, ya know. So it's really comfortable for us to live around Death Mountain."
— Reagah

As an active volcano, the burning air can lead to spontaneous combustion if Link is unprotected. To survive, he must be wearing armor that grants the Fire Guard effect or consume Fireproof Elixirs that grant a temporary Flame Guard effect.

The Divine Beast Vah Rudania is found on Death Mountain, having been trapped there by the Boss of Goron City Bludo and Goron Champion Daruk's descendant Yunobo. Bludo had the Bridge of Eldin raised to trap it on the mountain; while this keeps Goron City safe, it prevents the Goron Group Mining Company from mining closer to the summit. Bludo and Yunobo work together to drive the Divine Beast away to keep contained. In Link's Recovered Memory of Daruk, it is revealed that before the Great Calamity, Death Mountain was peaceful and had been inactive for some time; however, after experiencing a tremor, Daruk wondered if Death Mountain was responding to Ganon's imminent return.

After saving Yunobo, Link travels with the Goron up the mountain, attacking Vah Rudania with cannons while avoiding its Sentries and Magma Bombs. They eventually defeat it, allowing Link to venture inside and defeat Fireblight Ganon, avenging Daruk and freeing his spirit to retake control of Vah Rudania. While firing the Divine Beast's beam at Calamity Ganon in support of Link, Daruk gazes upon his homeland and is pleased to see his descendant and Goron City thriving a century after his death, while Yunobo waves at his ancestor.

Death Mountain is the location of the "untranslatable slab" (no known official name) in the Light World, and Ganon's Tower in the Dark World.

Death Mountain serves as the location for Goron Target Practice.

Death Mountain appears as the first level in the Ocarina of Time branch.

Death Mountain appears as a location.

The Legend of Zelda comics

Death Mountain is the home to Ganon's hideout.

However in Breath of the Wild, there is some suggestion the location of Rito Village and Lake Totori might be the remains of the Dragon Roost Island volcano with the lake being formed from its collapsed caldera.

It is also widely believed that Eldin Volcano from The Legend of Zelda: Skyward Sword was later renamed Death Mountain, as it is the only mountainous area in the land that would eventually be known as Hyrule. Like Death Mountain, it is an active volcano however it is far more active volcano than Death Mountain is and is inhabited mainly by the Mogmas and Bokoblins, instead of Gorons. It can be assumed that eventually Eldin Volcano became less active and the Gorons settled there at some point. One of the caves in Eldin Volcano is also shown to contain Rupee Ore, while the rocks on Death Mountain are known to be a good source for Rupees, which indicates that both share similar geological compositions that allow for the formation of Rupees and Rupee Ore, another indicator that they may be one and the same. The lack of Rupee Ore on Death Mountain could be attributed to mining of Eldin Volcano for Rupee by the Mogma, Gorons, and Hylians before and/or after it became less volcanically active. 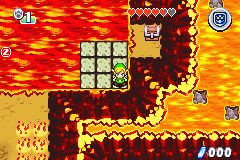 The interior of Death Mountain from Four Swords
Retrieved from "https://zelda.fandom.com/wiki/Death_Mountain?oldid=541580"
Community content is available under CC-BY-SA unless otherwise noted.