Zelda Wiki
Register
Don't have an account?
Sign In
Advertisement
in: Enemies, Common Enemies and Traps, Reptilian Enemies,
and 5 more 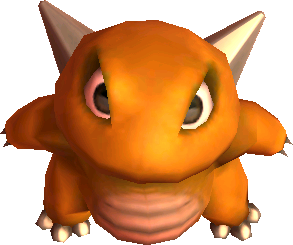 Sword (Series)
Magic Powder (ALttP)
Quake Medallion (ALttP)
Magic Hammer (FSA)
Bombs (ALBW)
Hammer (ALBW)
Deadrocks are recurring Enemies in The Legend of Zelda series.[1] They are bipedal, rock-based creatures that typically make their home on mountain ranges, such as Death Mountain. When hit by a weapon such as a Sword, they will briefly morph into impenetrable rock statues and remain in that state for a few moments before transforming back into their normal, mobile form. Their statue form renders them invulnerable to nearly all attacks.

In A Link to the Past, Deadrocks appear on the mountain ranges of Death Mountain in the Light World. They move in quick, erratic patterns and inflict heavy damage if they run into Link, making them particularly dangerous enemies. When they are hit with weapons such as Link's Sword, they transform into stone statues and remain that way for a few seconds before becoming mobile again. While the statue form is nearly invincible, they will not cause damage when stunned, allowing Link to pass them by unhindered. Although Deadrocks cannot be defeated by most weapons, if Magic Powder is sprinkled on a Deadrock or if Link uses the Quake Medallion, they will turn into Slimes and can easily be dispatched.

Deadrocks in Four Swords Adventures are similar to their A Link to the Past counterparts, though they may be destroyed by fire and can be crushed with the Magic Hammer.

Deadrocks in A Link Between Worlds have the same behavior as those in A Link to the Past. However, when turned into stone, they are vulnerable to the Hammer and Bombs. They can be spawned from the falling boulders erupted from volcanoes.

Deadrocks appear in Levels of the Ice Cavern in Tri Force Heroes, in contrast to the warmer climates that they seem to prefer. As with their previous appearances, they run around erratically and are often found in groups. They are normally found in places with slick, icy floors suspended above bottomless pits, rendering the fight much more difficult. Striking them with any weapon briefly turns them into stone statues, which can then be destroyed by quickly smashing them with the Magic Hammer. As these Deadrocks return to their regular forms much faster than in previous appearances, it is advisable that the Links try to team up against them, and to use the Sword against an active Deadrock rather than the Magic Hammer, which cannot be swung quickly enough in succession. Wearing the Cozy Parka to gain traction or Hammerwear to increase the Hammer's speed and range will make the battle much easier. Deadrocks appear in the Silver Shrine and the Ice Temple, as well as the Scorching Zone of the Den of Trials.

Deadrocks appear as enemies in Cadence of Hyrule, where they can be found within Gerudo Desert and Gerudo Ruins. They chase the player on every beat, and when attacked, they transform into rock. They must then be hit with an explosive (i.e. a Bomb, a Bombchu, or Din's Fire) to completely kill them. When in rock form, they can be picked up while wearing the Power Glove and thrown at enemies. Tossing them into lava will not only kill the Deadrock, but also turn the lava into hot coal which could be walked on, making them useful for navigating areas with lots of lava.

The name Deadrock likely refers to their appearance and defensive abilities, as enemies with small, angelic wings who turn to stone.