Zelda Wiki
Register
Don't have an account?
Sign In
Advertisement
in: Articles Lacking The Minish Cap Images, Mechanics, Mechanics in A Link to the Past,
and 24 more 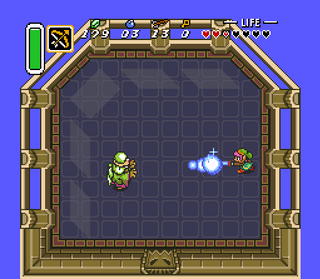 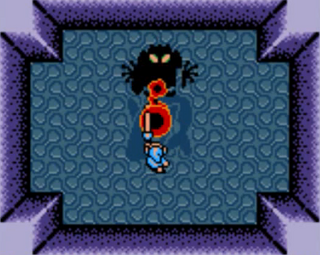 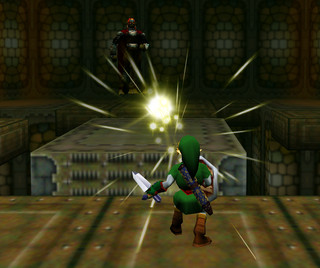 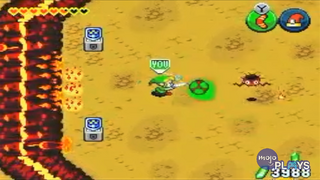 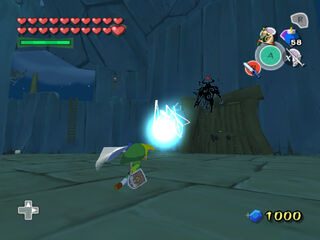 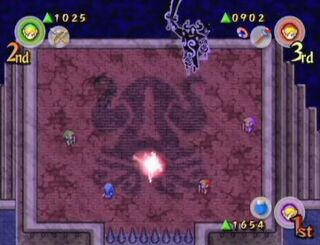 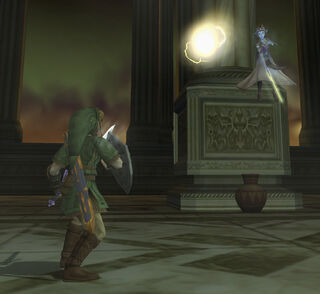 Nintendo Land
Hyrule Warriors
Hyrule Warriors Legends
Hyrule Warriors: Age of Calamity
Dead Man's Volley[1][note 1] refers to a technique in certain Boss battles where Link swings his Sword at an oncoming projectile, turning it back on its caster to inflict damage or cause a Critical Point. In many games, the Boss will return Link's volley. A rhythmic rally ensues where the projectile is knocked back and forth until one party fails to counter and is struck by it. Dead Man's Volley is typically used against primary antagonists or their clones.

Bosses to be defeated by Dead Man's Volley may have other projectile attacks that require special tactics to volley, or that cannot be volleyed at all and must be dodged. Usually the volleying attack is a single flashing ball of energy. In games where Link rallies back and forth with the boss, these rallies tend to become longer as the battle progresses. These can be shortened by standing closer to the boss, giving them less time to react.

Humorously, Link can perform a volley with items like a Bug Net, Empty Bottle, or Shovel in some games.

Dead Man's Volley first appears in the battles against Agahnim, who is too powerful to be harmed by anything but his own magic.[2] Agahnim has multiple magical attacks, one of which is a flashing white ball of energy that can be volleyed back at him to cause damage. His second attack is a blue cluster projectile that splinters when struck – it must be avoided.

In the second encounter with Agahnim, he produces two clones which can only perform the one attack that can be volleyed. Link can volley a clone's attack at the real Agahnim, but the clones themselves cannot be harmed.

If timed correctly, the volley can be performed with a swish of the Bug Catching Net.

Agahnim's Shadow, the second form of the final boss Shadow Nightmare, is defeated with Dead Man's Volley the same way as the real Agahnim in A Link to the Past. It has two attacks: the energy-ball attack to be volleyed, and the splintering cluster to be dodged.

The energy ball can be volleyed with the Shovel.

Ocarina of Time introduces back-and-forth rallies to Dead Man's Volley. It occurs in the second phase of the battle against Phantom Ganon when he casts yellow energy orbs at Link. At the end of the game Ganondorf uses the same attack. Both can be volleyed with a Bottle.

Ganondorf has a second magical attack where he launches multiple projectiles at Link. An ordinary sword swipe is not sufficient to fend off the attack as it deflects some but not all of the projectiles. A well-timed Spin Attack volleys all the projectiles back at Ganondorf, stunning him immediately.[verification needed]

Oracle of Ages and Oracle of Seasons

The Blue Stalfos Sub-Boss in Oracle of Ages has two magical attacks similar to those of Agahnim's Shadow. However, the energy-ball attack does not cause damage. Instead, it turns Link into a vulnerable baby for a few seconds. When it is volleyed back at Blue Stalfos, the boss turns into a skull-faced Keese for the same amount of time, during which it is vulnerable to sword strikes.

In the first phase of the battle against Twinrova, Link volleys Koume's fire attack to Kotake, and Kotake's ice attack to Koume. This combines Dead Man's Volley with the Mirror Shield reflection tactic used to defeat Twinrova in Ocarina of Time.

In Four Swords, Gouen launches a colored orb which can only be volleyed by the Link of that color. Instead of rallying with the boss, the Links can bat the orb back and forth between each other until it hits the boss.

The same tactic is used at the end of the game against Vaati.

In The Wind Waker, Dead Man's Volley is used against Phantom Ganon only. As in Ocarina of Time, Link and Phantom Ganon volley energy orbs back and forth until the latter is struck by his own attack. This is the first game in which the tempo of the rally increases with each volley.

In Ganon's Tower, Phantom Ganon begins using a greater multi-projectile attack similar to Ganondorf's in Ocarina of Time. In can be returned with a Spin Attack.

Phantom Ganon launches colored energy orbs to be volleyed by the Link of the same color. During the second encounter in the Temple of Darkness, Phantom Ganon creates multiple clones that throw colorless orbs which dissipate on contact.

In the final battle, Vaati's Wrath launches four energy orbs simultaneously. Link returns them all by creating three copies of himself using the Four Sword.

Link performs Dead Man's Volley against Possessed Zelda when she uses her sword to cast balls of energy. As in The Wind Waker, a rally ensues that increases in pace until Zelda is struck by her own attack. Zelda has no Critical Point — the attack inflicts damage on her directly.

An Empty Bottle can be used to volley the attack.

In the boss battle against the Cubus Sisters, one of the four sisters will launch a blue-white orb at Link. They receive Link's return shot by batting it to and fro amongst each other for a while before sending it back at Link. Link wins a rally when one of the sisters is hit or killed by a return shot.

Bilocyte spits green projectiles which Link must deflect with his sword back towards the boss's protective frills.

In the final battle against Ghirahim, Link returns Ghirahim's sword beams at him by swiping in the right direction, either vertical or horizontal.

Dead Man's Volley is used against Yuga Ganon, in which the Net can also be used as in earlier games. After several exchanges between them, Yuga Ganon will be struck by his own magic and get stunned, then merge into the wall as a Painting.

Dead Man's Volley is used against Lady Maud. After hitting the orb, it will change color and fly to another Link. Eventually the orb will turn yellow and fly towards The Lady, resulting in the orb being volleyed between her and the Links.

In Battle Quest, the Dead Man's Volley appears when fighting Wizzrobes in Co-Op Play. Wizzrobe will occasionally throw a glowing orb that is the same color as one of the Links. The color shows which Link is being targeted and must volley the orb. Only Links holding swords will be targeted by the attack. If the orb is volleyed by Wizzrobe, it will gain speed and may change color. It is also possible that the orb will split into three orbs, each targeting a different Link holding a sword.

In Hyrule Warriors, a form of Dead Man's Volley is performed as one of Link's attacks as part of the Great Fairy weapon. The button combo B, B, Y has the Great Fairy briefly release Link from his giant Bottle, and the two volley an orb of light back and forth. The Great Fairy then grabs the orb and attacks surrounding enemies with the blast. As the attack animation is performed automatically, Link does not need to volley the orb for the attack to succeed.

Dead Man's Volley also appears in Hyrule Warriors Legends when fighting against Phantom Ganon. Unlike its other appearances, where the orb is volleyed a random number of times before the boss is hit, Phantom Ganon will always be hit by the orb after the Warrior volleys the orb three times, exposing his Weak Point Gauge. After Phantom Ganon has taken a certain amount of damage, he will change his tactics and no longer attack the Warrior with orbs, thus preventing Dead Man's Volley from being used.

Because the Perfect Guard requires a Shield to be used, only Link (equipped with a one-handed Weapon), Urbosa, or Riju can initiate the Dead Man's Volley.

The name is a play on the title of the murder-mystery novel Dead Man's Folly by Agatha Christie.