Zelda Wiki
Register
Don't have an account?
Sign In
Advertisement
in: Sword Techniques, Abilities, Abilities in A Link to the Past,
and 6 more 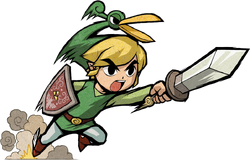 The Dash Attack is a maneuver performed when Link utilizes both the Pegasus Boots and his sword,[1][2][3] resulting in a headlong forward Sprint, sword drawn and held out in front, ready to skewer foes in Link's path. It appears in all games featuring the Boots. Although it can be used to attack foes, the attack is generally named in-game for crashing into trees to knock useful items from their branches.

In A Link to the Past, this attack will be used automatically whenever Link uses his boots. Unlike in some later appearances, this attack can occasionally be used to open some cracked walls, a feature normally reserved for Bombs.

In Link's Awakening, both the boots and his sword must be equipped, but the sword can be slashed instead of just thrust during the attack. If the sword is unequipped, Link will simply dash forward unarmed. Unlike other games, different weapons can be used in the dash attack, like Link's Shield or Bow.

After obtaining the Pegasus Boots in The Minish Cap, Link must visit Swiftblade to learn the Dash Attack. The attack will be automatic whenever Link uses the boots afterwards, but before he learns it, he will just run headlong without touching the sword.

After obtaining the Pegasus Boots form the Shady Guy in A Link Between Worlds, Link can perform the attack by pressing the L Button on the Nintendo 3DS. It is used almost identically to that in A Link to the Past. However by pressing the Control Pad in the opposite direction after dashing, Link will screech to a stop with a unique animation.

The Dash Attack does not require the Pegasus Boots in Tri Force Heroes and can be performed from the beginning of the game. If Link wears the Ninja Gi, he can Dash Attack instantly and deal triple damage to Enemies.

In Soulcalibur II, the Dash Attack is part of Link's moveset and goes by the name of Hyper Dash Attack. It is considered to be a mid-attack and deals 90 HP worth of damage when fully charged. To perform it, the control pad must be pressed back twice followed by the vertical attack button and the kick attack button at the same time. This will cause Link to run towards his opponent while thrusting his sword forward. The more the attack is charged, the farther that Link will run. When the Hyper Dash Attack is completely charged, Link's sword will be engulfed with fire and will deal more damage.