"When Cia opened a doorway to the era of the Hero of Time, a brave warrior stepped through the portal and added his strength to the current battle, just as he had done ages before. As a proud Goron chieftain, Darunia makes his home in Goron City, located in the heart of the volcanic Death Mountain. Like all Gorons, his entire diet consists of rocks. It's Goron tradition to refer to loved ones and trusted allies as "brother," an attribute Darunia has not left behind on his journey through the ages."
— Darunia, Goron Chief Historical Entry Tutorial Bio

When Cia uses the Triforce to warp time and space to free the Spirit Fragment locked away in the Water Temple, Death Mountain from the Era of the Hero of Time appears in Hyrule, transporting Darunia and the Gorons along with it. A girl calling herself Zelda also appears, causing Darunia and the Goron Forces he leads to become hostile and violent. Darunia captures his fellow Sage Princess Ruto and holds her prisoner on Death Mountain.

The Land of Myth

Eventually, the current incarnations of Impa and Sheik appear in the Era of the Hero of Time to close the Gate of Souls that has opened in the Water Temple. The pair is approached by Navi the fairy, who explains the situation and Darunia's odd change in character. Impa and Sheik are surprised at how hostile Darunia and the Gorons have become but fight them nevertheless. Eventually Darunia is defeated, retreating back to his room; however, he soon reappears, fully healed and ready to fight. Impa and Sheik manage to destroy the door to his room, as well as his stash of Rock Sirloin, which he had been using to regain his strength. Sheik and Impa confront Darunia in his room, discovering that he is being manipulated by Big Poes. They defeat the Big Poes and Darunia again, allowing him to regain his senses. Admitting defeat and apologizing for his actions, Darunia releases Ruto, who explains that the source of the problem was in Lake Hylia.

Wanting to make amends for allowing himself to be manipulated, Darunia and the Goron Forces, along with the freed Ruto, join Impa and Sheik's Hyrulean Forces in order to defeat the one calling herself Zelda. At Lake Hylia, Impa is stunned to see Princess Zelda apparently leading the army of monsters guarding the Gate of Souls. Convinced this Zelda is an imposter, she joins Sheik, Darunia, and Ruto in combating the fake Zelda in order to close the Gate of Souls. Darunia fights heroically alongside his allies, even confronting a revived King Dodongo. With the aid of his fellow Gorons and allies they defeat the Fake Zelda, who is revealed to be Wizzro, general of the Dark Forces, by the Lens of Truth. Sheik also reveals her true identity as Princess Zelda, and together, she and Impa close the Gate of Souls.

Having completed their task ahead of Lana and Link, Zelda and Impa return to their era, leaving Darunia, Ruto, and the Goron Forces to defend Lake Hylia and the Water Temple from the Dark Forces. This proves to be a wise decision, as Cia's other general, Volga, arrives with his forces. Meanwhile, a young Hylian girl named Linkle appears from the same era as Zelda and Impa. Having gotten lost while on her way to Hyrule Castle, Linkle decides to aid Darunia and Ruto in fighting against Volga and the Dark Forces, as she believes herself to be the Legendary Hero. Darunia and Ruto welcome her assistance and join forces with her to defeat Volga; however, Darunia recklessly charges ahead of Linkle and Ruto, confident he can defeat Volga with his legendary Hammer. Darunia soon finds himself surrounded by the Dark Forces. Fortunately, Linkle and Ruto arrive in time to assist him and together, they defeat Volga's subordinates and Darunia manages to defeat the Dragon Knight himself with the aid of Linkle and Ruto. Afterwards, he and Ruto parted ways with Linkle.

After all three Gate of Souls are closed, Darunia and Ruto join up with their allies, Princess Zelda and Impa. They meet the current incarnation of the Hero and the White Sorceress Lana, as well as their allies from other Eras: Twilight Princess Midna and Insect Princess Agitha from the Era of Twilight and Fi the Spirit of the Goddess Sword from the Era of Skyloft. Zelda apologizes for her deception as Sheik and, at Midna's urging, Lana reveals that she and Cia were originally a single being. Cia was corrupted and the light was driven from her heart, and that "Light" became Lana. Lana then reveals that Cia was manipulated by none other than Darunia and Ruto's old enemy Ganondorf. He had gotten Cia to free the sealed fragments of his soul that had been broken and scattered across time by an incarnation of the Hero to end the cycle of strife over the Triforce. Meanwhile, Ganondorf regains his physical form and ends his alliance with Cia, deciding to steal the Triforce from her and break the seal on the final fragment of his soul by himself. Cia distracts him by sending the Triforces of Courage and Wisdom back to Zelda and Link, before using the Triforce of Power she held onto to reseal him, as she had her own plans to conquer Hyrule.

Believing the power of the Master Sword is required to defeat Cia, Zelda leads the allied Hyrulean Forces to the Temple of the Sacred Sword, which had been built to house the Master Sword, keeping the final fragment of Ganondorf's soul under seal. Darunia joins his allies and uses his power as the Sage of Fire to awaken the Statue of Wave and Flame while having to contend with the Ghost Forces. Eventually he manages to awaken his statue, but is exhausted after doing so and is forced to retreat. Through his actions, however, he aids the current incarnation of the Hero in acquiring the Master Sword.

With the Master Sword in the hands of the Hero, Darunia joins his allies in assaulting Cia and the Dark Forces at the Temple of Souls. Wielding the legendary blade made Link become overconfident and reckless, just as Darunia had been during his encounter with Volga. Cia uses the darkness in Link's heart to create doppelgängers of Link known as Dark Links. Darunia and his allies manage to fight off the Dark Links, but Link is eventually cornered by four more. With the assistance of Midna, he manages to block and counter one of the Dark Link's strikes, saving Link along with Lana, Impa, and Fi. His allies help Link realize his limitations and allow him to awaken the true spirit of the Hero, giving him access to the power of the True Master Sword. Ganondorf appears, determined to claim the pieces of the Triforce for himself. While Darunia retreats with the others, Link confronts the Demon King to protect Zelda, who is unable to flee due to Ganondorf's power. Link manages to defeat Ganondorf with the Master Sword, forcing the Demon King to retreat. Meanwhile, Cia flees the Temple of Souls and goes back to the Valley of Seers. 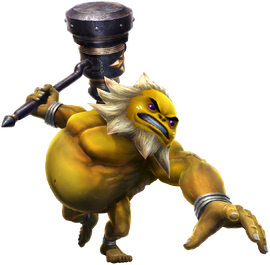 As a member of the Goron race, Darunia possess a natural toughness and the ability to curl up into a ball and roll around. Darunia has some knowledge of Sumo, a martial art practiced among his people; however, like his ancestor, Darunia fights primarily with Hammers specially designed to be wielded by Gorons. As the Sage of Fire, he can manipulate both fire and lava, as well as use Magic Circles to summon large boulders of hardened magma.

Dark Darunia is a shadowy doppelgänger of Darunia that appears as an enemy in Adventure Mode. He uses the same moveset and drops the same Materials as Darunia. 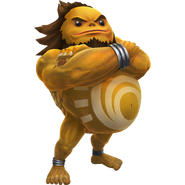 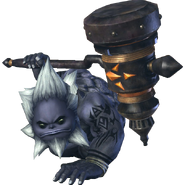 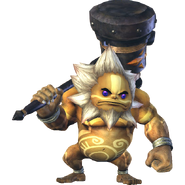 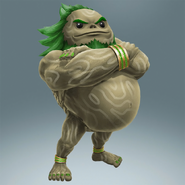 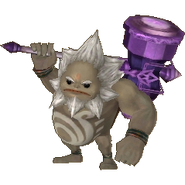 Retrieved from "https://zelda.fandom.com/wiki/Darunia_(Hyrule_Warriors)?oldid=539971"
Community content is available under CC-BY-SA unless otherwise noted.