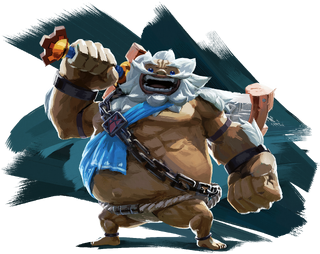 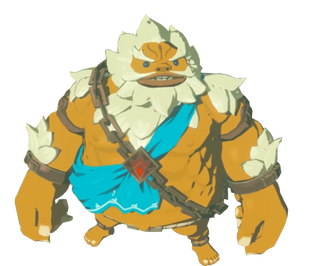 Daruk is a recurring character in The Legend of Zelda series.[2][name reference needed]

Daruk was the warrior Goron Champion, one of the appointed members tasked with piloting the Divine Beasts in the war against Calamity Ganon 100 years ago. He was the pilot of the Divine Beast Vah Rudania.[10] He was described as being generally calm, but becomes wildly excitable in battle.[11] He possessed the ability known as Daruk's Protection, a red crystal polyhedric barrier that can deflect any attack or incoming damage to the user.[12] Daruk was ultimately killed when Calamity Ganon corrupted and seized control of the Divine Beasts, pitting him against a monstrosity known as Fireblight Ganon.[13] His legacy is kept alive by the Goron people, who have a stone statue in his likeness overlooking Goron City.[14]

In life, Daruk was a friend to Link. In Link's earliest Memory, Daruk and the other Champions were gathered as Princess Zelda led a ceremony in appointing Link as her knight. Daruk remarks how discouraging the presentation sounds,[15] prompting a quip from Revali that the ceremony was Daruk's idea.[16]

In another Memory, Daruk and Link were aboard the Divine Beast Vah Rudania as Daruk drove it over the mountains. Together they survey the mountains, which Daruk swears to protect with his life.[17] A rock slide then suddenly interrupts them, and Daruk shields Link by using Daruk's Protection. The event causes some concern for Daruk about the state of Death Mountain.[18]

Daruk was also present with the other Champions at the base of Mount Lanayru, as they waited for Zelda's and Link's return. Daruk asks Zelda if she had any luck with praying at the Spring there,[19] but is visibly disappointed to hear there were no answers. The group is then suddenly interrupted by the re-emergence of Calamity Ganon. Daruk then takes command as he tells the other Champions to return to their Divine Beasts, and for Link to head to Hyrule Castle.[20] Unfortunately, Daruk met his end at the hands of Fireblight Ganon and his spirit becomes trapped for the next hundred years while the monster took control of Vah Rudania.

100 years later in the present, Link boards the Divine Beast Vah Rudania to free it from Ganon's influence, which he was able to reach with the help of Yunobo, the descendant of Daruk.[21] As Link activates the first Guidance Stone there, he hears the voice of Daruk's spirit guiding him to the next Terminal that will give him a Map of the Divine Beast.[22] Upon activating it, Daruk then instructs the hero to find the remaining five Terminals inside and on the Divine Beast,[23] before finally guiding him to its Main Control Unit.[24] As Link approaches the Unit, he engages with Fireblight Ganon, and Daruk helps guide him through the resulting battle.

After Link defeats Fireblight Ganon and regains control of Vah Rudania, Daruk appears before him as a spirit. He thanks the hero for setting his spirit free,[25] but apologizes as he feels responsible for Hyrule falling in ruin.[26] Daruk, however, is confident that with Vah Rudania under their control, they can finally resume their plan to defeat Calamity Ganon.[27] Daruk also gives Link the ability to use Daruk's Protection,[12] before bidding him farewell as Link is warped out. Daruk then drives Vah Rudania to the top of Death Mountain, where he takes aim at Hyrule Castle in preparation to attack Calamity Ganon.[28] There he surveys Hyrule and wonders how the Gorons have fared since the Great Calamity.[29] It is then that he notices Yunobo staring back at him, reassuring him of the well-being of his people.[30] The two Gorons then wave to each other.

Daruk's spirit again appears whenever Link uses Daruk's Protection, blocking any attack while active. His voice will also inform Link when the ability has finished recharging.

Daruk once wielded a heavy sword called the Boulder Breaker in life. This sword is now with Bludo, who entrusts it to Link in gratitude for stopping Vah Rudania's attack.[31]

Following Dark Beast Ganon's defeat, as Link and Princess Zelda leave the ruined Hyrule Castle behind, Daruk's spirit along with the other Champions' and King Rhoam's spirits watch them from the sky before quietly disappearing.

In the "Champion Daruk's Song" EX Recovered Memory, it is revealed that Daruk has a fear of Dogs after saving a Hylian Retriever that was being attacked by a group of Bokoblins. He admits to Zelda that Dogs always chased him when he was younger and that he still panics when he sees one.[33] Zelda is surprised by the revelation that Daruk has a weakness.[4] Daruk then seeks assurance from Zelda the Calamity Ganon is not a Dog monster.[34]

An amiibo based on Daruk released on November 10th. This amiibo is compatible with Breath of the Wild's DLC packs.[35]

In Super Smash Bros. Ultimate, Daruk appears as a Spirit with the ability, Weight 🠅, which makes a Fighter weigh more so it is harder for them to be launched, but at the same time reduces their jump height and movement speed.