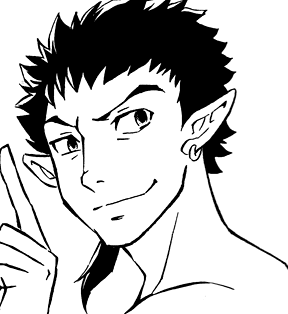 Darpa is a character in the Twilight Princess manga by Akira Himekawa.[citation needed]

Before the events of the manga took place, Darpa lived in a city that guarded the border of a desert.[2] He and the other boys would practice sword fighting so they could one day defend Hyrule's borders.[1][3]

Darpa confronts Link after he tells Zeu and Rioma that he will drive away the desert thieves left handed.[4][5] Darpa says one of the thieves is a demon thief and tells Link not to get cocky with his sword skills.[6] Rioma asks what Darpa plans to do.[7] The boy says he has a plan to get a sword stronger than magic.[8] This sword turns out to be the Gaurof Sword.[9] Darpa, followed by Link, Zeu, and Rioma, enter the building where the Gaurof Sword is kept. Rioma reminds Darpa that they are not allowed near the weapon.[10] Darpa says if he is scared of getting in trouble to go back.[11] Link tells Darpa that thousands have tried to pull the sword from its stone but failed.[12] Darpa says he heard it has the power to drive off a god and it is the right sword for him.[13] Insults are thrown at Darpa as he tries to pull out the sword but fails.[14][15][16] He tells Link to give it a try.[17] When Link hesitates, Darpa says that if he pulls it out, he will be a hero.[18] Link steps forward and successfully draws out the blade.[19] However, the stone sucks the boys and the entire city into it, with Link as the only survivor.[20]

In the manga's second volume, Wolf Link has a flashback showing Darpa with Rioma and Zeu, feeling despair that they were unable to protect Princess Zelda like they had trained to do.[21][22]