Darknut Swords are swords from The Legend of Zelda: The Wind Waker. Wielded by Darknuts and Mighty Darknuts, they are some of the most powerful weapons in the game; in fact, until the Master Sword has its power fully restored, they are the strongest weapons Link can use. Darknut Swords are powerful enough to knock down pillars in certain rooms to reveal hearts, arrows, Rupees, or other items. Link can acquire a Darknut Sword by counterattacking a Darknut and causing it to drop its sword, or by defeating the Darknut.

Darknut Swords cannot be carried between rooms as they are not available for use from the inventory screen. They can be thrown to damage enemies at long distances; however, due to the weight of the swords, they do not fly very far, and take a little longer to swing than most other weapons.

Darknut Swords appear as unobtainable enemy weapons used by Darknuts. Due to the game's Darknuts being based on the ones from The Wind Waker, the Darknut Swords in The Minish Cap have a similar design. 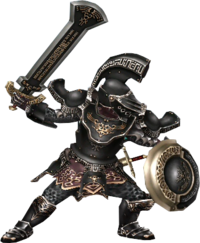 Darknut Swords appear as unobtainable enemy weapons used by Darknuts. All Darknuts carry at least two types of Darknut Swords: A large broadsword which they use as their primary weapon and a rapier-like backup sword that all Darknut's use after their plate armor is removed.

The blade of the broadswords used by Regular Darknuts has a curved section on one side.

The Darknut mini-boss encountered in the Temple of Time, wields a unique Darknut Sword as its primary weapon.

The Darknut mini-boss wields his Darknut Swords from Twilight Princess in the Darknut Battle stage.

Artwork of Link clashing swords with a Darknut from Twilight Princess 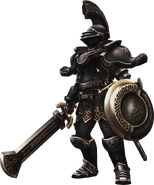 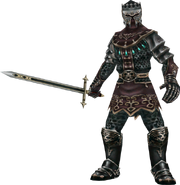 Render of the Mini-Boss's Heavy Darknut Sword from Twilight Princess 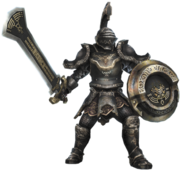 Mighty Darknut wielding a Darknut Sword from The Wind Waker 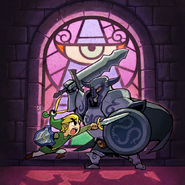 Retrieved from "https://zelda.fandom.com/wiki/Darknut_Sword?oldid=540464"
Community content is available under CC-BY-SA unless otherwise noted.