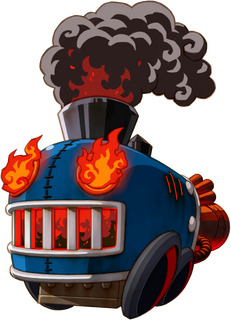 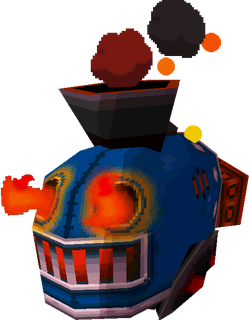 Cannon
Dark Trains are recurring Enemies in The Legend of Zelda series.[1]

Dark Trains were originally normal trains that became possessed.[2] They attack by crashing into the Spirit Train, exploding on contact and destroying it with a single hit. Dark Trains can either be evaded or temporarily halted by through the use of the Cannon.

When two Dark Trains are on a collision course, they will both stop short of colliding and then turn around, rotating on their bases. Dark Trains destroy anything on their path, including enemies like Bulblins, Tanks, and Flaming Boulder. However, they will not explode when hitting anything besides the Spirit Train.

Dark Trains appear on the Spirit Train Stage in Super Smash Bros. for Nintendo 3DS. They ram into the Spirit Train, slowing it down while pushing it towards the edge of the screen. They also appear as a Trophy.