This refers to the location of the Demon Train in Spirit Tracks. You may be looking for the Dark World, the prison of Ganon in A Link to the Past. 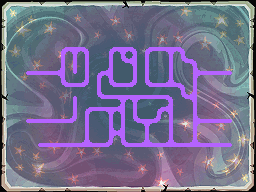 Map of the Dark Realm as seen in Spirit Tracks.

Dark World
Twilight Realm
The Dark Realm is a location in Spirit Tracks.[1] It is a dimension of darkness that is connected to New Hyrule. It is the realm where the Demon Train is situated, which Chancellor Cole locates and later uses it to free the Demon King Malladus from his prison.[2][3]

The entrance to the Dark Realm is found in the Forest Realm, on a small island to the west of Aboda Village. The Spirit Tracks extend even into the Dark Realm through a portal found on the island and extend all throughout the realm, providing a means for Armored Trains to roam its seemingly infinite depths, in addition to the Demon Train that serves as the primary source of transportation for Malladus and Cole in the Dark Realm.[4][3] If Link blows the train whistle when in possession of a Tear of Light, the Spirit Train will travel nearly three times faster.

The only way to gain access to the Dark Realm is by obtaining the Compass of Light from beneath the altar of the Tower of Spirits. The compass was made by Byrne using the power of the Spirits of Good[2], and once Link and Princess Zelda obtain it, it will reveal the Spirit Tracks which connect to the entrance of the Dark Realm.[5] Link and Princess Zelda journey to the Dark Realm toward the end of the game to reclaim her body and defeat the two villains once and for all.

The Dark Realm is the home to the Demon Train and later the hiding place of the Demon King Malladus and his minion Chancellor Cole.[2] After reviving Malladus by infusing his imprisoned spirit into the vacant body of Princess Zelda using the altar located at the very top of the Tower of Spirits, Cole flees with Malladus aboard the Demon Train, retreating back into the Dark Realm to await the time when Malladus will be fully in control of Zelda's body and ready to once again attempt conquest of Hyrule. Byrne, betrayed by the evil duo, reveals that the Spirit Tracks extend even into the Dark Realm and that the only way to locate the entrance to the Dark Realm and locate Malladus aboard the Demon Train within it is to find the Compass of Light hidden in the upper floors of the Tower of Spirits.[6] After Link and Zelda recover both the Bow of Light and the compass, they see that a previously unknown set of tracks have appeared in the Forest Realm, leading to a small island just off Hyrule's southwestern coast, where the portal leading down into the Dark Realm is located. Taking the Spirit Train through the portal, they enter the Dark Realm to purge the evil hiding in it and restore Zelda to her rightful body.

Armored Trains fill the realm and roam its tracks, forcing Link to dispose of them using the Tears of Light scattered throughout the tracks to successfully locate the Demon Train. Here, the Spirit Train gives chase to the Demon Train, with Link pursuing it across the Dark Realm while firing away at the Demon Train with his cannon in an attempt to stop it and allow Zelda and himself the chance to climb aboard it.

After succeeding in stopping the Demon Train in its tracks for a brief time, the duo climb aboard to face Cole and Malladus. Malladus, now in full control of Zelda's body, awaits at the head of the train's roof while Cole floats around in the air above the train's roof. Protecting Zelda's Phantom body from Cole's demonic rats while helping her move toward her possessed body at the head of the train, Link is able to help Zelda reach the head of the train where she seizes Malladus and floats into the air above the train. Link then shoots Malladus with the Bow of Light, purging Zelda's body of his presence and causing the Demon Train to crash, throwing everyone out of the Dark Realm and back into Hyrule, where Link and Zelda would face the Demon King in a final, decisive battle for the fate of Hyrule.

Realms in The Legend of Zelda series
Community content is available under GNU Free Documentation License unless otherwise noted.
Advertisement