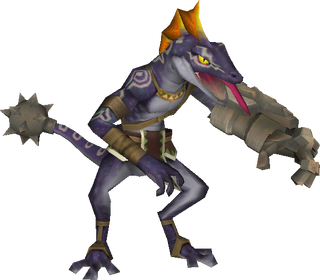 Dark Lizalfos are saurian enemies characterized by their orange-crests, purple hide and superior strength over normal Lizalfos. They initially appear as mini-bosses in the Fire Sanctuary, though they reappear as regular enemies in the Sky Keep. Dark Lizalfos behave similarly to their regular counterparts, nimbly jumping away from threats and defending themselves with their large gauntlets or striking with their morning star-tipped tails. Also like normal Lizalfos, they are prone to taunting Link from behind their gauntlets, creating an opening in their defenses. When sufficiently struck, they may fly back and temporarily collapse on the ground, opening themselves to a Fatal Blow. However, their defense can also be broken by a sufficiently powerful strike to their gauntlets, which also knocks Link off balance. At this moment, they will swipe their gauntlet at Link. They can be knocked off balance themselves by a well-timed Shield Bash against one of their attacks.

Dark Lizalfos are capable of producing a smoky caliginous breath instead of fire, which can Curse Link and temporarily incapacitate him.[2] Dark Lizalfos wield their gauntlets single-handedly, on either their right or left arms. They can appear in groups of two of opposing handedness, flanking each other to provide additional defense with their gauntlets. When appearing alone, they will always be left-handed to act as a foil for Link's right-handedness. Upon defeat, they may drop any combination of Lizard Tails, three Hearts or Rupees.

Dark Lizalfos appear as blackened variants of regular Lizalfos in Hyrule Warriors. They behave identically to their normal counterparts, though they appear exclusively as members of the Rogue Forces in KO and Rupee competition Battles in Adventure Mode.