"Found in many locations, these winged monsters are attracted to dark places, such as caves. They often gather in colonies, are active at night, and sleep in the day. Those who come too close and awaken them often fall victim to attack."
— Fi

Dark Keese are enemies from The Legend of Zelda: Skyward Sword. They are a more powerful type of Keese that are found in many regions, including the Fire Sanctuary. Like Fire Keese, Dark Keese can dodge Link's sword attacks more often. Dark Keese often gather in colonies and are active at night. When a Dark Keese comes in contact with Link he becomes jinxed. When defeated, Dark Keese occasionally drop Evil Crystals. Like Cursed Bokoblin, they appear to be an undead variety of Keese as they have a skeletonized appearance. 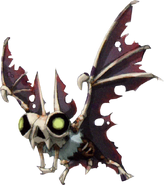 Retrieved from "https://zelda.fandom.com/wiki/Dark_Keese?oldid=508795"
Community content is available under CC-BY-SA unless otherwise noted.