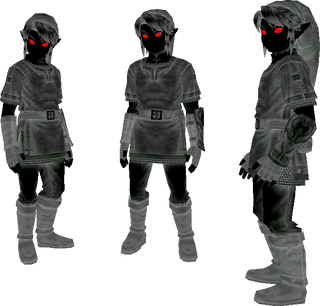 Controlling the Sacred Realm
The Dark Interlopers,[1] also known as the Interlopers,[2] are a tribe of sorcerers in Twilight Princess.

In ancient times, the Interlopers were Hylians who had attempted to control the Sacred Realm and ultimately the Triforce using their powers.[3][4] In response to such audacity, the Goddesses of Hyrule ordered the three Spirits of Light, Faron, Eldin, and Lanayru, to seal up the power they had mastered into the Fused Shadow, thus rendering the interlopers powerless.[4] The interlopers were then banished to the Twilight Realm using the Mirror of Twilight.[4] The tribe would eventually become the Twili race due to their adaptations to the realm.[4]

Following the revival of Lanayru, the spirit induces Link to have a vision telling of the creation of Hyrule, the Sacred Realm, and the Triforce.[5] Link, clad in his Ordon garb, is seen floating as a witness to the vision; then he and Ilia are seen as part of it, representing all peoples of Hyrule who lived in the prosperity given by the Triforce.[6] The scene and music then grow ominous, as Ilia is shown holding a serpentine, curved-bladed dagger, while Lanayru speaks of the first wars ever held in the name of entering the Sacred Realm and claiming the Triforce.[7] As the view pans up to her blank-eyed gaze, she turns as if to strike Link beside her, but it seems that the blank-eyed Link was quicker and had stabbed her in her throat with the Ordon Sword. Link then plunges the Sword into the ground.

Now in his iconic green tunic, Link is then seen running, dreamlike, towards the Triforce, which sits upon a small, grassy hill representing the Sacred Realm, but is stopped by three dark Links who rise from the ground before the Triforce: the Interlopers. Lanayru then describes them as a tribe of Hyrule with powerful magic, who desired control of the Sacred Realm.[2] The Interlopers summon the power of the complete Fused Shadow, which rises like a giant from the horizon, even eclipsing the Triforce itself. They then use their magic to completely vaporize Link. The vision cuts and pans to show that the dark Link in the middle has stolen Link's appearance, save for the eyes, which are blank again. He chuckles in triumph as a version of Ganon's main theme is heard.

It was at that moment that Faron, Eldin, and Lanayru, ordered by the goddesses, descended onto the scene and sealed the Interloper's powers, driving the Fused Shadow back down as the Interlopers turn in disbelief.[8] The green-clad dark Link then screams in terror, as all of the Interlopers are removed from existence in the Light World, with a sudden, haunting finality. Lanayru reminds Link that the Fused Shadow is the artifact he has been reassembling, and warns Link of its nature, and the corrupt nature of power itself, the vision showing a downpour of slowly spinning, falling, madly laughing Ilias.[9] A sign of infectious madness seems to touch Link himself. As the vision ends, Link awakens with a look of shock upon his face.

Though unnamed, the Interlopers appear in the beginning of the Twilight Princess manga by Akira Himekawa as Midna is recounting the history of the Twili. One Interloper resembling a hooded Hylian is shown with clawed hands and markings on his arms.

The definition for interloper is "someone who becomes involved in a place or situation where they do not belong or are not wanted".