Darbus is a character from The Legend of Zelda: Twilight Princess. He is the leader of the Goron tribe of Death Mountain. With the aid of four Goron Elders, he keeps order in the tribe. Although somewhat rough, pompous and seemingly condescending towards others, Darbus does seem to be a decent being in general.

Darbus led the mining program of Death Mountain. One day, he led a mining expedition through the Goron Mines, and laid his hands upon the Fused Shadow, transforming him into Fyrus. The four Goron Elders then did their best to seal Fyrus away in the Goron Mines, but when Link arrives at Death Mountain to retrieve the Fused Shadows, Gor Coron, the elder who became a proxy patriarch in the absence of Darbus, requests for him to go into the Mines and save Darbus. Eventually, Link gathers the shards of the Boss Key from the Goron Elders, and makes his way into Fyrus' chamber, where he defeats him in combat. Upon defeat, Fyrus morphs back into Darbus, and becomes the patriarch once again, seemingly forgetting his time as Fyrus, being left only with a painful headache from the experience. It is revealed that none of the other Gorons disclosed the fact that Link, a "human", saved Darbus, fearing that their leader may be offended. This fear is later confirmed to be quite rational, as when Link talks to Darbus afterwards, the Goron will eagerly offer his help to the hero, but then somewhat rudely laughs at the idea of Link being able to help him, despite evidence to the contrary.

Later, when Link goes to the Hidden Village, Darbus uses his strength to destroy the pile of rocks blocking the entrance. "Smelling" danger in the air, Darbus also warns Link of the twenty enemies in the town, telling him that the best way to destroy them is to "get them before they see you".

Darbus appears as a trophy in this game. 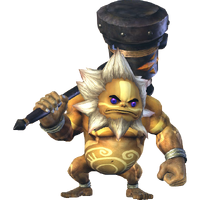 Though Darbus himself does not appear, Darunia's unlockable Standard Outfit (Twilight) is a Darbus Recolor.

Retrieved from "https://zelda.fandom.com/wiki/Darbus?oldid=496912"
Community content is available under CC-BY-SA unless otherwise noted.