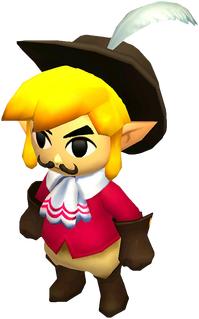 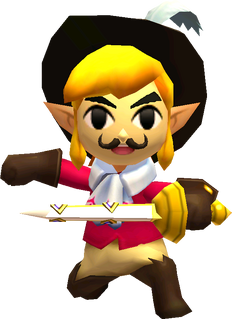 The Dapper Spinner is an Outfit that can be crafted at Madame Couture's. It becomes available for purchase after Link opens a losing Treasure Chest in the Daily Riches mini-game for the fifth time, at which point the Daily Riches Owner places an order for the Outfit in recognition of Link's repeated bad luck.[3] The Outfit costs ten Freebies, which can only be obtained from Daily Riches, and 300 Rupees.

In reality, the Dapper Spinner appears to be based on The Three Musketeers. In addition to its cavalier hat and noble clothing, the Outfit gives Link a twirled mustache and a Sword similar to a rapier.

Any Links who join the game through Download Play will be unable to obtain the Dapper Spinner, since they cannot leave the Multiplayer lobby to visit the Daily Riches.