"With a portal to the Era of the Great Sea opened, the King of Red Lions himself came through to aid the legendary hero in his cause. King Daphnes Nohansen Hyrule was an ancient land's final king, forced to watch his home fade into legend under the Great Sea. He also helped Toon Link in the guise of a red boat. Harking back to his times as that red boat, King Daphnes purges evil from this world with a powerful sail, and even changes back into a boat during certain attacks."
— King Daphnes, the King of Red Lions in-game tutorial Bio

King of Red Lions, Daphnes Nohansen Hyrule (ダフネス・ノハンセン・ハイラル, Dafunesu Nohansen Hairaru?) is a playable character from Hyrule Warriors and Hyrule Warriors Legends. He is the legendary final King of Hyrule who aided the Hero of Winds in the Era of the Great Sea.

"Bring light to the children of this kingdom! A future of hope!"
— King Daphnes

King Daphnes is stern, yet kind. He acts as a father figure to all those around him, and as a noble king, he puts the safety of others before his own. Despite his royal status, King Daphnes has a soft spot for children. The prosperity of his kingdom and its people are his top priority; however, through his encounters with the Hero of Winds and his descendant Tetra, he becomes focused on working towards creating a brighter future for them. Though a stern figure most of the time, he is known to tell the occasional joke in calm situations. 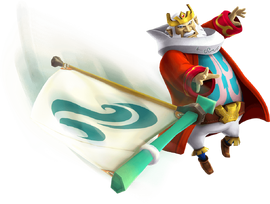 Like most members of the Royal Family of Hyrule, King Daphnes possess power magical abilities such as levitation, teleportation, and transformation. He also shown to possess telekinetic abilities which he uses to open Treasure Chests and wield his Sails. His Sails hold the power of wind and the fury of the Great Sea, allowing him to manipulate both wind and water. As a former King of Hyrule, he is a capable military commander and wise leader.

King Daphnes is capable of transforming into a talking red boat called the King of Red Lions. He occasionally transforms into this form during certain combos and attacks.

Dark King Daphnes is a shadowy doppelgänger of King Daphnes that appears as an enemy in Adventure Mode. He uses the same moveset and drops the same materials as King Daphnes. He can also transform into a Dark version of the King of Red Lions.

Retrieved from "https://zelda.fandom.com/wiki/Daphnes_Nohansen_Hyrule_(Hyrule_Warriors)?oldid=539962"
Community content is available under CC-BY-SA unless otherwise noted.