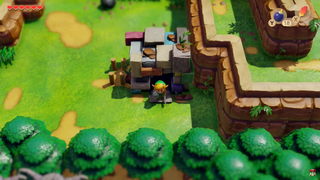 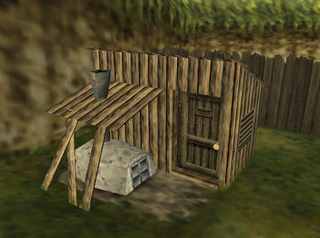 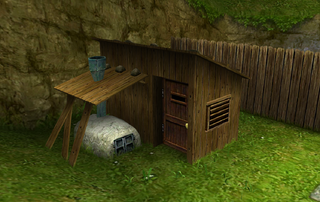 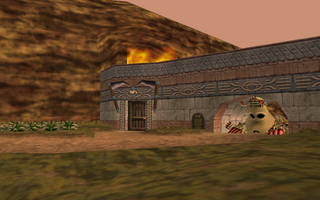 Dampé's Shack appears in place of the Photographer's house from Link's Awakening DX at Tal Tal Heights in Link's Awakening for Nintendo Switch. Inside his Shack, Dampé constructs Chambers for Chamber Dungeons, which he allows Link to arrange and explore.

Dampé's Shack is located in the Kakariko Graveyard in Ocarina of Time. Young Link can only enter it during Dampé's Heart-Pounding Gravedigging Tour, which is from 6 P.M. to 9 P.M; otherwise, Dampé will tell the young hero that he is either sleeping or that the gravedigging tour is over. The only interactive object inside the hut is the Gravekeeper's Diary, which mentions how Dampé found a treasure that stretches and goes "boing!".

Once Link turns into an adult, he will be able to enter the hut at any time. Upon reading the Diary again, the gravekeeper prompts the reader to seek out his grave and enter it, whereupon he will let them have his treasure: the Hookshot.[10]

Appearing again in Majora's Mask, the shack is found in the northern portion of the Ikana Graveyard. It can only be accessed from beneath the grave accessible on the night of the Third Day.

In Four Swords Adventures, the shack is found within the Graveyard in the northern Swamp. Here, Dampé tells the Links about the Dark Mirror which a dark tribe was sealed away in long ago.

Dampé's Shack is located in the northeastern area of the Royal Valley. Dampé lives within it, and he will give Link the Graveyard Key to access the Graveyard, and by extension the Royal Crypt, when Link comes and speaks with him.[11]