Not to be confused with Dampa, a sailor in The Wind Waker. 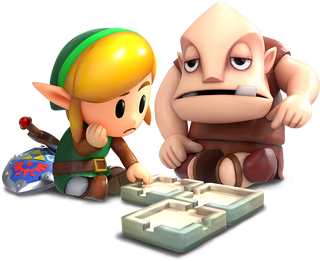 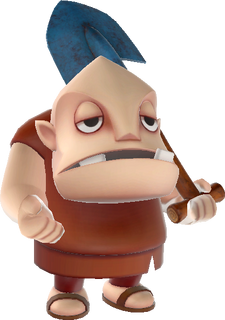 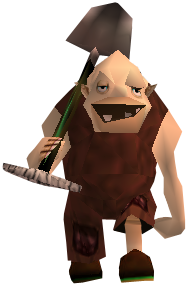 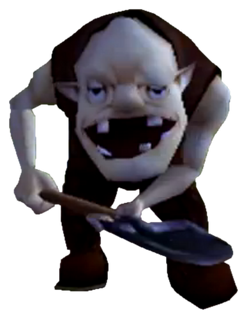 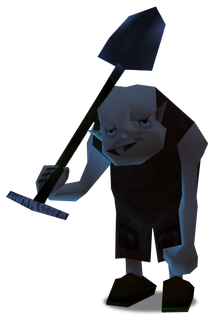 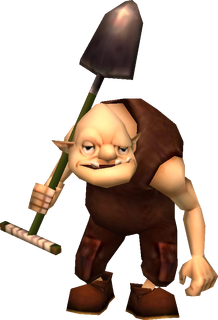 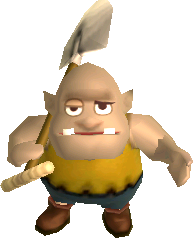 Force Era
Era of the Hero of Time
Shadow Era

Dampé is a recurring character in The Legend of Zelda series.[5][6][note 1]

Dampé lives in his Shack in Tal Tal Heights in Link's Awakening for Nintendo Switch. In his Shack, he crafts Chambers based on the dungeons around Koholint Island which can be arranged into Chamber Dungeons.[8]

Dampé lives in his Shack in the Kakariko Village Graveyard in Ocarina of Time. He presides over the graveyard,[9] sleeping during the day and pacing it at night.[10] Dampé's Heart-Pounding Gravedigging Tour is his famed nightly romp: he unearths any plot of dirt along his route through the graveyard when asked, either revealing a Piece of Heart, Rupees, or nothing at all.[11] A young boy walks the graveyard during the day, mimicking Dampé's walk and chastising Link anytime he tries to pull on a gravestone, threatening to tell Dampé.[12][13]

Dampé died during Link's seven-year disappearance, however, his ghost can be found in his grave.[2] He challenges Link to a race and rewards him with the Hookshot as promised in his Diary that he left posthumously inside his shack.[14][15] Finishing the race in under a minute also warrants a Piece of Heart. If Link does not finish in under a minute after obtaining the Hookshot, he will receive a Red Rupee instead. After obtaining the Hookshot, it can be used on a torch to cut a few seconds off the clock in the race, allowing Link to beat it more easily in less than a minute.

Dampé appears as the gravekeeper for the Ikana Graveyard in Majora's Mask.[16] Though terrified of ghosts, he keeps a haunted graveyard.[17] Little is known about Dampé, but it is insinuated that he used to visit the graveyard with his father.[3] Apparently, he also has a wife.[4]

If Link talks to Dampé while wearing the Captain's Hat, Dampé, originally believing ghosts only come out at night, will become terrified and run around the graveyard before running back to his house and locking the door.

On the third day, Dampé can be found underground beneath a gravestone searching for the treasure of Ikana's Royal Family.[18] However, his torch has gone out, so he asks Link to guide him with his fairy's light.[19] By Z-targeting him, Link can lead Dampé to mounds of dirt where he will sometimes dig up a blue fire. Once three such fires are found, they come together and reveal a Big Poe,[20] causing Dampé to run away. Once Link defeats this enemy, a Treasure Chest containing a Bottle reveals itself. In Majora's Mask 3D, this was changed to a Piece of Heart instead. If Link leaves the area, he will find himself in Dampé's house, with Dampé hiding underneath his bed.

Dampé lives in the graveyard found to the far north in The Swamp in Four Swords Adventures. He is the caretaker of the graveyard, but since monsters roam the place, he can not do his work.[21] He is also tormented by Shadow Link whom he warns the Links about, surprised at how similar they are to him.[22] Dampé then tells the four Links about a mirror, in which a dark tribe was sealed in a long time ago, informing them that it is hidden somewhere in the Forest of Light.[23]

Dampé lives in his Shack in the Royal Valley and tends to the graveyard in The Minish Cap.[24] Upon hearing that Link was called to the Royal Crypt by the spirit of Gustaf, he gives Link the Key to the graveyard.[25] After Link recovers the Graveyard Key from the Takkuri, Dampé opens the gate for him.[26]

When spoken to after obtaining the gold Kinstone Piece from within the Crypt, he will state a secret path in the woods of the Royal Valley that leads to 50 Rupees.[27]

Dampé appears again as a gravekeeper in A Link Between Worlds. He initially appears to be dull-witted, as he refers to himself in the third person, but he also claims to understand that the Captain only visits the Sanctuary to see Seres.[29] While Link is searching for the Captain, he encounters Seres and Dampé speaking. After Seres becomes trapped within the Sanctuary, Dampé remembers that the Priest spoke of a secret passage into the Sanctuary and prompts Link to use the Forgotten Sword to make his way through it.[30]

Dampé appears in Kakariko Village as a gravekeeper.